This week, let’s talk about some news that I got that is trending towards good (finally).

I don’t know if you remember me mentioning it before, but my competitive dance partner Sparkledancer is injured. Just saying that doesn’t do justice to how she’s been feeling – in reality, the injury has been pretty bad for her. Like ‘living with a level of constant pain that makes standing up and walking around difficult’ bad. This injury really interrupted her way of life and made it difficult to get through her day doing normal things (like her job) without taking a lot of painkillers to try and dull the sensation so she could somewhat function.

Back in February she was finally able to make an appointment with some sort of specialist to try and figure out what was going on with her, since her regular doctor hadn’t been able to help her too much. This specialist was difficult to schedule an appointment with since he was highly in demand and only took appointments with patients one day a week. It must be nice to be able to dictate your hours like that. Maybe I need to look into changing careers so that I can go to work and only have to deal with customers one day a week. Wouldn’t that be nice?

The first exam with the specialist seemed promising, and he thought that he had a pretty good idea of what might have been wrong with her, so he gave her some sort of medication in the form of a huge painful injection where the needle was stuck into a gross area, and then set her up with a physical therapist that would give her some exercises to help strengthen the area that they thought was causing the problem for her. With the medication coursing through her system and the exercises to work on, they set plans to meet back up in a month to review her progress and adjust accordingly.

Of course, as you all know, a month later the whole country basically shut down, so that second appointment got canceled because it was considered ‘non-essential’.

The treatment that Sparkledancer had been given didn’t help as much as she had hoped it would. Once the medication she was given worked its way through her system, the pain came back, and some of the exercises that the physical therapist had given her definitely exacerbated the issue further. Since there was no way to get in contact with the specialist or the physical therapist, she had to just stop doing the exercises to keep from making things worse and hope that spending time doing nothing would help the injury heal on its own. Luckily, as you all probably know, being quarantined is a good opportunity to sit around doing nothing.

Two-and-a-half months went by with her doing nothing. Since she gave up doing the exercises that the physical therapist gave her, the pain stopped getting worse, but it didn’t really get much better either. As this area of the country started to open back up , Sparkledancer was finally able to get in touch with first the physical therapist and then the specialist to talk about the update to her condition.

The physical therapist gave her different exercises to work on that would still help her rebuild her strength in areas, but would hopefully not cause any further issues. These exercises were all built around the initial diagnosis that she had been given by the specialist. When she finally got a chance to go talk with him again, the specialist worked with her some more and decided that, based on how her symptoms had changed after the initial work they had done, the first diagnosis was probably not correct. He gave her a second likely diagnosis of the cause of her issue, but said at this point the next best thing they could do would be to set her up to have an MRI done on the area and see if that would show them for sure if this diagnosis was correct or not.

Now, since this area of the country hadn’t opened back up completely by that point, you can probably guess how much fun it was for her to try and get this MRI scheduled. I mean, from what she told me when she relayed this information to me, first she had to get the MRI approved by her insurance company, which was a hassle because they were all working weird hours and had trouble getting in touch with the specialist to discuss the reason for needing the test. Getting that approval was more of a hassle than it normally would have been, and once they finally approved it another couple of weeks had gone by.

When they did finally approve it? The lady from the insurance company called her and said “You’re all set, and also I scheduled your MRI for tomorrow, so… I hope that’s OK.” I mean, it was, since Sparkledancer was still under quarantine at home, but what if she hadn’t been? Then once she got the appointment for her MRI, she was able to call back and try and make another appointment with the specialist.

That appointment was a bit nerve-racking, since she wanted to set something up as soon as possible, which was only a few days after the MRI appointment, and there was no guarantee that the results of the scan would be sent over to the specialist by that time. There was a possibility that she could show up to see him and they would have nothing new to talk about. Of course, if she didn’t take that appointment and the results did get sent over, she would have had to wait a whole extra week until the next time the specialist was in the office seeing patients to go over the results with him. She decided to roll the dice and hope that everything worked out.

And, luckily, everything did! They had her scan results when she went in for her appointment early this week, and were finally able to see what was actually causing her all that pain. Hooray! 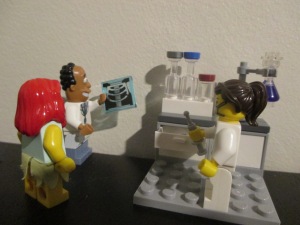 Turns out that both of the initial diagnoses were wrong. The MRI showed that one of her lower vertebrae was basically bulging out, pulling the nerves in her spine out along with it and causing her all the weird issues. Now that they knew what was really wrong, they were able to give her another medication using another long and painful injection into a gross area (this time, specifically into the bad vertebrae) and send her on her way.

The hope is that now that they know for sure what is up and are treating it properly, this time around she should feel a real difference in a week or so when the medication starts to take effect. She’ll have to go in for a follow-up in another month, and at that time will probably have to have a second round of medication given to her since this injury has been persistent for a long period of time, but the outlook for making a recovery is promising.

Obviously, for her, dance is still completely off the table for at least the next couple of months. While trying to get the vertebrae to heal, she’s not allowed to do anything that would potentially irritate the area until someone verifies that she is able to carry out the motions without hurting herself. So, even as dance studios in this part of the country talk about getting back into the swing of things and instructors start offering lessons again, she isn’t going to be participating for a while longer.

But, even so, it’s good to know that things are looking better for getting my dance partner back. I mean, just thinking about how I would have to start training all over again with a new partner if she didn’t get better makes me sad.

(I’m kidding… I wouldn’t do that. I would dance with my cat instead.)

So, wish Sparkledancer luck that this new course of treatment is the last one she has to deal with to get over this painful injury that’s been plaguing her for a long time. Fingers crossed that the recovery is speedy!