Well, it’s happened in my neck of the woods much like I’m sure that it happened in yours: dance shutdown. The dance parties that I was hoping to get to this weekend? Cancelled. Group classes at the studios near my house? Cancelled. For the foreseeable future, it looks like the Dance Kingdom is going to be a place where everyone stays at home rather than gathers together to have fun.

I get it. As I mentioned, the dance community is mostly populated by people who fall into the high-risk categories. From what I’ve been told, a lot of those older individuals don’t see themselves as being old (even though math tells us that their ages are well within those ranges) and they don’t want to stay home because they think this is no big deal. In order to not be held liable for someone getting ill because you decided to keep your studio open and offer classes and parties, many dance studios are in a position where they need to reduce the types of services that they offer. It just makes good business sense… as much as closing down and not having income come in makes good business sense. What a weird thing to say. The world really does feel a bit upside down right now.

Since I use this site to talk exclusively about dancing, I don’t know how interesting things are going to get as time goes on if the ballroom world remains shut down. We’ll have to see how things progress. There are some topics that I have in the back of my mind that are dance related that I could ramble on, things that I’ve been hanging onto for a rainy day, but it’s not enough topics to fill multiple months worth of regular once-a-week posts. Sigh…

Luckily, this week I have something different to talk about! On Monday night, when I would have normally made a trip out to the Electric Dance Hall for Latin Technique class, Lord Junior was offering a live virtual class that was free for anyone who wanted to watch! He put it together to see if there was any demand for this kind of class while people were stuck at home. I got to watch and dance along somewhat (more on that in a bit), and from the list of people attending that I could see there were a lot of people who were watching that don’t usually come out to the studio for the Monday night class, so the class size was (virtually) bigger than a normal Monday night would have been. That’s good!

It was a bit weird to watch, I have to say. Lord Junior was in the studio with Lady Peculiar, and they had set up the camera on one of the tables in the corner of the dance floor. The rest of the studio (and the Electric Dance Hall is a fairly large studio compared to most in the area) was completely empty. Normally on Monday nights there are tons of people there – all the people for Latin Technique class, plus all the people who go for the other group class that happens at the same time as Latin Technique, plus anyone there taking private lessons… seeing just the two of them there and hearing the echo from their voices as they talked was weird. Almost spooky.

Since this class was put together as an exploratory offering to see if there was any interest, and was also being given for free to anyone who joined the group, Lord Junior spent time covering the basic technique points of International Rumba. It wasn’t anything I hadn’t seen before, but there were quite a few people watching who had only ever done American Rumba, so some of the points he covered like when to straighten your legs, the timing used for your steps and what the basic figure for the dance looked like were all new to those individuals.

We spent quite a bit of time looking at the different types of Rumba Walks which are all used in International Rumba at some point. This also gave us all exercises that we could do if we had the ability (and space) to practice along at home on our own. Can you name all the different types of Rumba Walks? There are seven that we covered. Take a second to see how many you can name!

Working on these walks was the part that I didn’t spend a lot of time doing. I had a laptop set up at the edge of my living room so that I could watch the class and also have some space to move around. I thought that if I was on the carpet I could do everything pretty well. As it turns out, after about ten minutes of doing any of the Rumba Walks that had turns built in, like when we practiced the Turning Walks or practicing the Checked Walks by doing New Yorkers, my knees decided to protest the movements I was doing. A. Lot. I don’t know why so much of the turning action seemed to want to remain contained in my knee, but it did. That was not pleasant, as you can imagine, so I stopped after a while. 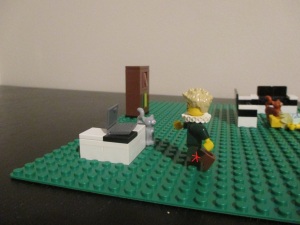 My cat was watching me from underneath the island while I was walking back and forth. I’m not sure if she thought I was weird because I was moving around but not going anywhere, or if she was just waiting for me to sit down so she could climb into my lap. But whatever the reason, she was watching me very intently. I hope she thinks I did pretty OK.

If the class is offered next week for a nominal fee like Lord Junior talked about to help cover the expenses of maintaining the studio, I may try and move the furniture around and see if dancing in my socks, or even my actual dance shoes, while on the kitchen floor works out better. Carpet just doesn’t seem ideal for working on just the basic movements I was doing this week. I can’t even imagine what it would feel like if we had gotten into more advanced figures!

So, that’s what I was able to do to stay connected to dance this week. What about you? How are you faring so far? Were you still able to get out and dance in a studio with other people around, or is everything shut down in your area as well?

We can get through this together. Hang tough, stay smart, and we’ll come out on the other side! If you miss dancing and want to work on some International Latin stuff on Monday nights, send me a note and I can let you know about any more virtual classes offered that I will be attending virtually. If you go too, then we can totally high-five virtually when class is over!

One thought on “This Empty Room Is My Companion”