I didn’t do a whole lot of dancing this past week. Lots of people seemed to go on vacation over the weekend, so I ended up just hanging around at home sorting through some old drawers and getting rid of a bunch of stuff I no longer use. That was kind of liberating. I probably could have done it in a lot less time and still gone out dancing at some point last weekend, but my cat decided that she wanted to “help” me with my cleaning, which made everything take a lot longer than it should have. She’s just too fuzzy to ignore…

So Monday night was my first notable time out dancing when I decided to get out of the house and go to Latin Technique class. Some notable faces who had been out on vacation for the last few weeks also came back to real life that night, so we had a fairly large turnout. Unfortunately, large turnouts also mean that my vote on what to do in Latin Technique got easily overridden, so we ended up going over some Cha-Cha during that class.

We started off by looking at the Curl figure from the Silver Cha-Cha syllabus. To get into the Curl gracefully we used a Forward Lock as a starting point. Once everyone had the Curl down, Lord Junior decided that we would take out the syllabus ending for the figure, where the Lead would lead the lady out into Fan Position, and instead replace that with a Reverse Top for fun. I know, that sounds like so much fun, doesn’t it? Starting the Reverse Top after the Spiral Turn portion of the Curl isn’t so bad if the lady knows what you are going to lead her through, but if you want to pull off this combination of figures socially you have to be really confident in your lead between the two to make sure the lady doesn’t try and step off in the wrong direction.

After two measures of rotation in the Reverse Top we finished with a side step to the left. While we were practicing the choreography really slowly Lord

Junior gave us a set amount of rotation to shoot for so that we would all come out of the Reverse Top facing the same direction, but as we tried to speed up the figure that idea got thrown out the window. We had started class all lined up in one row to make rotation through partners easier, but as we added on more figures after the Reverse Top we had to stagger everyone to different parts of the room so that there would be space around us no matter which direction we ended up coming out in. Even staggered as we were there were still a few times when someone had to pull their steps short to avoid a collision. Barely controlled chaos, I suppose.

Once we took that side step to the left, we led our partner through another quick Spiral Turn, and then started walking backwards while leading her to follow us before rotating her into an Aida. We did the basic rocking action in the middle of our Aida, but rather than coming out and leading the lady through a simple Spot Turn we instead came out by turning into Solo Switch Turns side-by-side. After the turns we were able to link back up with our partner and go into a basic chasse to the right to finish for the evening.

At the end of class Lord Junior thought it would be funny to have us all try this out at full speed. One of the ladies in class opted to sit out from that exercise. She said that the spinning action in the Reverse Top was making her dizzy, so she just watched the rest of us try things out from the sideline. I felt like I got through everything fairly well, so yay me! Also no one intruded into my area of the floor, so I didn’t have to worry about diving in front of my partner to avoid someone running into her. Also yay! What a good way to end the class.

On Wednesday night when I got to Standard Technique class, the only other person that I saw there for class was Sparkledancer. It was good to see her again, since she was one of the people who had gone off on vacation and hadn’t been around for a week or so. While waiting for others to show up for class we were looking at our calendars together to plan out when we would be meeting up to resume practicing now that she was back in town.

But by the time class was going to start no one else had shown up. Lord Junior told the two of us that a number of the other regulars in class had told him that they weren’t going to make it that night. Many of them are in the midst of preparing for a big Pro/Am competition that is happening this coming weekend, so they all have been working hard and just wanted a night off to rest, or were nursing some kind of injury and didn’t want to aggravate it by doing more physical activity. With Lord Junior all to ourselves for the next hour, Sparkledancer and I decided to look over some Tango for fun.

Because the two of us don’t often work with Lord Junior by ourselves, he had a few things that he wanted to go over with us that he told us he notices when he has seen us dancing – either in Standard Technique class or during the days when we go to the Electric Dance Hall to practice. Because these things were more for various points that were unrelated, we ended up looking at just a couple of unconnected specific figures to work on only the ideas that he had in mind, rather than trying a string of new choreography that we would need to spend time learning.

There were some interesting notes that Lord Junior gave us about figures that we had in our routine. Two in particular came up: the Back Open Promenade and the Fallaway Promenade. The notes were interesting because based on what Lord Junior said, the way we do these figures in our choreography may not actually be legal. For the Back Open Promenade what we do is that we start in Promenade Position moving toward diagonal wall, then on the third step I close around Sparkledancer so that I am backing line of dance. On the fourth step we had been told to put our feet down (my right foot, her left foot) and do a small pivot so that we end up facing diagonal wall against line of dance. That pivoting action is not something that is actually in the syllabus.

This particular variation wasn’t that bad though, and Lord Junior said that he could see what Lord Dormamu was trying to accomplish in the routine by having us add it there. In the Fallaway Promenade however, things are a little different. I think I mentioned that on the fourth step of the figure we were told to do a Ronde action with our outside leg. Lord Junior told us that there were no Rondes in any figures of the Silver syllabus. He’s never even heard of anyone trying to add one in before we showed him how we did it in our routine, because if he had he told us that he would have added it into his own routines for fun. So that… may be something to watch out for. If I get called out by an Invigilator for doing that variation, can I just tell them that Lord Dormamu told me to do it that way? Is that a valid answer?

Anyway, the last thing that Lord Junior was most interested in having the two of us work on was making our top line bigger. He had gone through quite a few 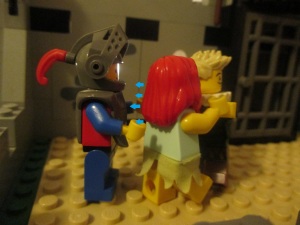 of the coaching sessions with Lady Kate the Great just like Sparkledancer and I had two weeks beforehand, and that was one thing that she had told him he needed to work on with all of his students. Most of this involved Lord Junior helping Sparkledancer stretch even further up and to the left during the figures that we walked through. I could pull myself a bit further in some ways, but doing too much to how I hold myself risks distorting my frame, which in turn would have made it super hard for Sparkledancer to do any of the things that Lord Junior wanted her to try.

So it was just a fun bit of playing around to see how much bigger we could make ourselves look while walking through a variety of figures. Like I mentioned, we did the Back Open Promenade and the Fallaway Promenade, but we also tried it out with the Fallaway Reverse and Slip Pivot to see if we could hold ourselves out bigger through some major rotation like the pivots in that figure require.

Now that Sparkledancer is back in town, I’ll be back to practicing a lot starting this weekend. It looks like it will be hot this weekend, so hanging around inside the studio might keep me cool. At least, until we decide to work on Quickstep or something. Then it may not be so easy to stay cool. Maybe if I brought along a fan that could help? Or some sunglasses? That could improve my coolness.