Would you look at that! I am finally getting new routines. It feels like I have been trapped, practicing and improving the same Bronze routines for 5,000 years, and suddenly someone has opened the window and I am able to finally get a breath of fresh air. As I write these down, I have this weird sense of accomplishment because I was able to prove that my fundamentals are strong enough to support moving up in the world, and also a sense of relief that I’m not stuck doing the same things over and over again in all the hours of practice that I put in every week.

Not that these routines are really groundbreaking per se – over all the years I have been dancing, I have had a chance to dance most of these figures somewhere before. A lot of them I have seen in Lord Junior’s Standard Technique class that I go to most weeks. Lord Junior has a philosophy that pushing students to do more advanced figures in a group class will help them improve faster, since a lot of the advanced figures require you to do the technique correctly to execute the figure properly.

My own coach has almost the opposite philosophy. He has told me that I should work on mastering the technique using the more basic figures first, and then as I move up the proficiency levels the technique will automatically be there in the figures that need it. That’s why he held my Amateur partner and I down in Bronze for so long to make sure that our fundamental technique was meeting his expectations. If all goes according to his plan, we should be able to pick up these routines quickly and move up to the next proficiency level in short order.

When I got together with my coach and Sparkledancer the first time on Saturday afternoon, we started out with the Waltz. The routine that he gave us was put together one wall at a time, and by the end of our session Sparkledancer and I were mostly able to get through it without having to stop and think about what figure comes next.

The easiest way to talk about what we did is just to map it out for you:

As you can see, there is a big difference between the first half of the routine and the second half. Lord Dormamu told me once we had the whole thing written down that he designs his routines like this on purpose. There isn’t a lot going on in the first half because that is where he wants me to be able to showcase the quality of my movement, so I am supposed to use those few figures to really move down the floor without doing anything complex. If I can’t get from one end of the floor to the other using just these figures, then he says that my movement isn’t going to be good enough to beat my competition. 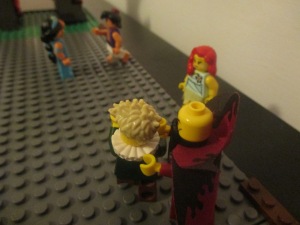 By the time I get to the second half of the routine, he told me that during a normal competition most judges will have already marked me based on how good I am moving. Now I can include more of the figures from the Silver syllabus to show off my mastery of them to any lingering judges that haven’t made their marks yet. That does make for a tight fit trying to do so many figures on the second long wall. So far, as I’ve practiced the new routine, I have had to pull back my steps a lot on the second long and short walls to avoid running off the floor.

Wednesday night I got together with Sparkledancer and Lord Dormamu again. This time we went through our new Foxtrot routine. The Foxtrot we were given has a completely different focus. In this routine, Lord Dormamu wanted to put in multiple instances of one figure, which he told Sparkledancer and I we would be working on from now until the end of time in all of our Foxtrot routines: the Reverse Wave. According to him, this figure is the one that can make or break a competitive couple, from Closed Silver where the figure is introduced all the way to the highest proficiency levels in the Professional division where he used to compete. It is that important. That is why he put this routine together with multiple instances of that figure for us to work on:

That last short wall may look like a lot crammed into a small space, but it really isn’t too bad. I thought the same thing at first when Lord Dormamu was

walking through the figures with me, but so far I have only had to adjust the angles slightly to make that all fit in on a smaller floor. Obviously when we put these routines together while at the Endless Dance Hall, we have slightly more space to work with than anywhere else in the world, so I was a little worried at first that it would be too much. So far so good though.

Exciting, right? I have another session with Sparkledancer and Lord Dormamu on the books for Saturday morning, with plans to go through the Quickstep routine in the same way. Once we finish that, we will try and schedule another session within a few days to finish up the Tango as well. An actual routine for Viennese Waltz won’t be created. Silver only adds the Reverse Fleckerl to the mix for syllabus Viennese Waltz, so fitting that in occasionally when I dance won’t do too much to change how I was approaching Viennese Waltz up until this point.

Sparkledancer and I have made plans to meet up this weekend for a bit more practice than usual to make sure we have the three routines that we should have by that point memorized completely before we see Lord Dormamu again to get the Tango. Once we have all four, we’ll put in the hours needed to grind things out to get them into muscle memory and start working with Lord Dormamu on the minor adjustments needed to make them look as good as possible. If all goes well and we work hard and get everything cleaned up properly, our first potential competition to try these routines out may be the last weekend in July. There’s another competition that was thrown out at the end of June, but we thought that might be too early since we haven’t even finished all the routines yet. July seems feasible though, so we’ll see if we can make that happen.

So new stuff to help refresh interest, and get me out of this rut that I was kind of stuck in. Hooray! I’m sure it’s not actually as exciting as it feels when I am writing everything out. Hopefully next week I will be updating this list with the other two routines, and will be beginning to make all the pieces look the way that they are supposed to so that I can impress anyone watching me. We’ll see what happens!