A quick note to start with about the showcase performance I went to last Sunday evening. The show was great, in large part because I knew practically everyone that was performing. That makes a big difference in how much I actually enjoy watching a show like this. On top of that, I knew a ton of the people in the audience too, so between the different acts I could talk with the people around me and make jokes about everything that was going on. Knowing people helps make good times even better.

There weren’t any really stand-out numbers from this particular show. One unique thing about this showcase was the sheer number of group dances that were put together for the show. By my count looking at the program that they printed off for everyone, there were seven different formation teams, with one of the teams dancing twice. Lord Junior likes to keep the number of performances at his showcases pretty low and mix in some social dancing as a way to help keep the audience from getting bored. Because of that philosophy, the formation team numbers made up almost 25% of the show based on my rough math. Whoa!

I didn’t even know that there were that many formation teams in the area around the Electric Dance Hall to begin with, so seeing them all perform in the same showcase was a unique experience. One of the formation teams was made up of three little girls. I have no idea how old they were, but to give you an idea of how young they were I can tell you that if any of those three were half my height (literally), I would have been surprised. One of the girls apparently hadn’t been planning on being in the show originally, but just decided that morning that she wanted to participate. She came out to the floor holding two big feathers and was waving them around while trying to follow what the adult leader was doing. When she couldn’t follow, she just jumped around doing her own thing with the feathers. Too funny.

Last Monday night I really tried my hardest to convince everyone else in Latin Technique class to vote for working on a different dance style, but my words fell on deaf ears and we ended up working on Samba anyway. I survived the class mostly intact – we spent a lot more time working on figures that used the Samba Bounce action this week than we have in a very long time, but I managed to muddle my way through. Having strong abdominal muscles that I can manipulate helps me give off the impression that I am doing the Samba Bounce action, even if I’m pretty sure that anyone watching closely would be able to see that I am faking it pretty hard.

We started off the progression that night in Shadow Position. Now, before I go any further, I want to mention something that Lord Junior did that I thought was interesting. Remember what I wrote about at the beginning of last month, where I was in Latin Technique class and we did something in Shadow Position and Seedling accidentally did all sorts of uncomfortable things with his hand to at least a couple of the ladies he danced with? This time around Lord Junior had us get into Shadow Position with our left hands holding the Follower’s left forearm as usual, but he had us place our right hand atop the lady’s right shoulder instead.

He told the class that when you do Botafogos in Shadow Position that’s just where the hand should go, but he never really had us change that hold when

we did other figures throughout the progression. Obviously putting the right hand atop the shoulder like that took away almost all the risk for error, protecting the ladies from having to go through the situation that happened last month all over again. I wonder if that was the reason that Lord Junior had us hold like that, or if that really is how you always do Botafogos while in Shadow Position? Obviously I don’t dance a lot of Samba outside of this class, so I just don’t know enough to be able to tell you the right answer.

With that interesting tidbit out of the way, what we did was this: starting off in Shadow Position facing the line of dance, we did two Botafogos. After the second one, we rolled the Follower out to our right as we brought our feet together. From this position we did a variation of the Rolling Off the Arm figure, where the Follower did a Three-Step Turn going to the left in front of us as we did a small chasse to the right behind her, stopping her turn by taking her right forearm with our left hand. Then we did the same thing again going back the way we came. We did a similar action one last time, but now the Follower did her Three-Step Turn going on an angle forward while the Lead faked a step, taking two steps forward to end up back in Shadow Position.

Here we did two sets of Cruzados Walks and Locks heading straight down the line of dance. When we got to the end of the second set, we rotated 90° to the right and did another two Botafogos in Shadow Position facing the wall. To finish, we did a step-and-point Volta combination that I have seen lots of times before, but can’t for the life of me remember the name of. I know that I’ve seen it used in quite a few places, and quite a few Samba routines that I’ve watched, but the name is just eluding me at the moment. If it comes to me later, I’ll let you know.

Finally this week, Wednesday night I went to Standard Technique class. This week in class Lord Junior gave us a few exercises to work on, and then allowed us to spend some time working on Viennese Waltz. I don’t actually spend a lot of time working on Viennese Waltz since most of the competitions that I do haven’t offered it for my level yet, but the competition that I am going to be in this weekend will require it of me, so it was nice to get in some extra practice.

Halfway through the class though, we had already managed to spend time looking at the Natural and Reverse Turns for longer than Lord Junior thought was fun, so he added in a figure from American Viennese Waltz to keep class interesting. It wasn’t actually much – just a Cross Body Lead into an Explosion, nothing fancy. Once we had gone through that figure, we attached it to one-and-a-half Reverse Turns, which is all we did that night. We never even looked at any Change Steps.

After class was over, one of the lady’s from class left right away, but the rest of us hung around outside the front of the studio in the parking lot talking for a 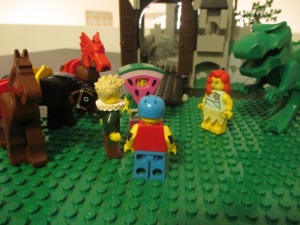 bit. Apollo tried to Apollo-gize (see what I did there?) to Sparkledancer and Bony for the way he had been dancing in class, since he only knew how to do Viennese Waltz the way that his franchise studio taught him, and there were a lot of things that Lord Junior was correcting him on. All three of us tried to tell him that we had also been there, coming from franchise studios ourselves originally, so there was no reason for him to feel bad at all, but I’m not sure that he really believed us.

Speaking of Apollo – he seems to really be taking to what he is learning in these technique classes, even if it is going slower than he expects of himself. I have seen him in the Electric Dance Hall, hanging around after his lessons are over of coming in early before class, just to spend a little extra time working on what he has been taught. In the long run, I think that Apollo will really be able to go far if he continues at this rate. He has mentioned that he is interested in competing one day, since he loves working on the technical aspects of all these dances that we do in class.

Apollo also brought his wife in to take one of the social-oriented dance classes on Tuesday night, and he introduced her to me while I was there to practice with Sparkledancer. Where Apollo really likes going to the technique-based classes, his wife told Sparkledancer and I that she only wants to dance for fun. That likely means that if Apollo really wants to head down the competitive path in the future, he will probably end up in the Pro/Am world to start with. Unless of course, some lady who wants to compete is able to make friends with his wife and convince her to let her compete with her husband. Male ballroom dancers who are excited about improving their dance technique are a rare breed, so I could actually see that happening if word about Apollo hits the streets.

This weekend I will be going to a competition again. This competition is going to be a bit different from any I have done in the past – I’m not really going to get any placements for my dancing at this event. Instead, Lord Junior had asked Sparkledancer and I if we wanted to do this competition because the dancers are going to be given ‘points’ for how well we dance, and those points will be awarded to the studio that brought the competitors to the competition. The studio that gets the most points is going to get a trophy, as well as bragging rights in our part of the Dance Kingdom.

I think Lord Junior asked Sparkledancer and I to come and dance for his studio because we are one of the few Amateur competitor pairs in the area, so there will be no one at this event for us to dance against. That means that he gets free points for his studio toward winning that trophy. I am only too happy to help with that goal. After all, Lord Junior’s studio is the closest to my house, and he is nice enough to allow me to spend a lot of my free time there for classes and practicing and whatnot. If I can help him bring home a trophy for the studio, it will make me feel good. I like helping.