When I met up with Sir Steven and Sparkledancer this past Saturday afternoon at the Fancy Dance Hall, other people were practicing some things on the dance floor, so we were told that we were going to keep things contained to the back half of the room to avoid running into anyone. I have to say that I am quite happy with the way I was able to manipulate my routines

to use the space without having to take tiny steps. As we have been doing recently, we started the afternoon off by looking at our International Standard routines. I threw Sparkledancer for a loop at first with the Waltz, since I took off and used the figures from the first long wall to cover two “walls” in our half-room, and then did the same with the figures from the next short wall, and so on and so forth. Doing so had us turning twice as many corners and covering twice as many ‘walls’ as the routine would normally, but this allowed us to do all the figures using our normal stride length. Once we got through the Waltz routine, Sparkledancer was on board with what was going on and was right there with me for the others as I tried the same thing.

The only routine that gave me a bit of trouble was the Quickstep, and that was really only because of the speed at which we were moving. I still managed to figure out how to make it work, but this one did not seem quite as smooth as the others did when I would get to a corner and have to turn more abruptly than I would have liked. After we had finished running through all of the International Standard routines once, we changed gears and spent more time working on proper swing technique in our steps. This time we worked on applying the technique in International Foxtrot and Quickstep rather than in Waltz like we had done last week. We spent most of the hour working on that, and it was not until right at the end that we switched over to quickly look at a few pieces of our American Tango and the new pieces of our American Waltz that we had added in last week.

This past Saturday night I was invited to go out with some people I often dance with to a non-ballroom dance club, just to screw around and dance for a while. I cannot decide if they invited me more because of the fact that I am a boy who knows how to dance, or because I do not drink so I am an easy pick to be the designated driver. Whatever the case, I ended up at a

place I will call the Pendulum Dance Hall. I did not know it before heading out there, but even though it was the first day of October they were holding a Halloween costume party. Had I known, I would have thrown together some kind of outfit for the night instead of just being out there in my street clothes. I’m pretty sure that the only thing that saved me from being really out of place were my dance skills. People are able to overlook a lack of costume if you can dance.

I will freely admit that I am incredibly bad at trying to dance without using things I learned in my travels throughout the Dance Kingdom. I think no matter what lady I was dancing with or what song was playing, I was usually dancing something that was either a direct figure or some modified version of a figure I learned in a ballroom class somewhere. If I was dancing with Sparkledancer, then they were for sure real syllabus figures that I knew. Most of the songs that were being played that night lent themselves to using figures from either East Coast Swing, West Coast Swing, Cha-Cha, Mambo/Salsa or Rumba. Doing West Coast Swing was the hardest one that night because of how crowded the dance floor would get during some songs. The other styles I was able to keep contained to a small area on the floor, but I still gravitated toward dancing near a wall with my back to the crowd to protect my lady friends from the other people jostling around.

The dance floor was tiny compared to what I am normally used to, because much of the building area was reserved for the seating area or for the bar (things that actually make the place money, I’m sure). The booths and chairs were arranged so that people sitting could easily see what was going on out on the dance floor. Because of that, both Sparkledancer and I had a lot of people who approached us to tell us how much they liked the way we danced, and a couple of people even asked us where we learned the things we knew. There was even this one couple who approached me and asked if I could recommend a place to them based on where they lived in the Dance Kingdom that they could go and take some lessons too. I’m glad I remembered to bring my Dance Ambassador hat with me that night so that I could be helpful. I haven’t really worn that hat in a while, and it felt good to pull it back out and blow off all the dust. Maybe I’ll even see some of those people on the dance floor in the future!

On Monday night while I was out at Latin Technique class, we all decided to look at Rumba since we had not done that for a few weeks. We started out by warming up looking at Latin Walks in slow motion. As good as it is to practice doing Latin Walks that slowly, it is way more difficult to do things correctly when moving at that rate of speed than it is to go closer to actual tempo. Afterward a grueling ten minutes of slow walking, we put together a little pattern of figures to work on for the evening.

To force us to use the Latin Walks that we had just practiced, we started with the Leaders and Followers split apart about ten feet on the floor facing each other. To get together, we each took

two steps forward to get close enough to clasp hands, and then the gentlemen took a third step to the side while the ladies took one final step forward . This set us up to transition easily into a Natural Top. To keep things fun for everyone, the first measure of the Natural Top was normal, then the second was in syncopated timing, adding in an extra step forward with our right foot at the end. We then turned the ladies around and went into an Opening Out action. When we lined back up into dance position, we had the ladies do a couple of side-to-side Swivels while the gentlemen just rocked back and forth in place. We did four such Swivels, and on the fifth we turned the ladies abruptly around while she was on our right side and she brought her left knee up (kind of like she was balancing in Tree Pose). We held this line for a few beats, and after the ladies brought their leg back down to stand on two feet again, we rolled her out quickly into Fan Position to finish the pattern.

Standard Technique class on Wednesday night started out a bit different from usual. Lord Junior actually had a video that he wanted to show the four ladies who had come to class of some super-high level dancers. He wanted them to see that all of the time he spends telling 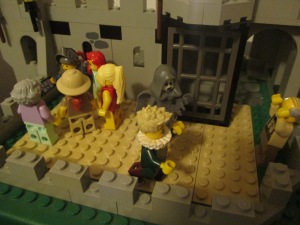 them about how they need to stay out to the left is not just because it amuses him, but that if they were to get better and ascend the ranks of dancers in the world that staying out to the left actually becomes a necessity. Lord Junior is on the technologically challenged side of things, so even though there is a big TV hanging in the studio, he did not know how to hook his phone up to it and project the video. The all gathered around on one of the couches to lean over the small device and watch. There was not a lot of room in that huddle, so I went out onto the dance floor by myself to spin around and wait until they wrapped up movie time.

Once everyone finished watching the video, they all came out to the floor so that we could start working on things. The dancers in the video had been doing Quickstep, so that was the dance style that we went with, giving the ladies a chance to emulate the things they had seen done. The pattern of figures we ended up with started out pretty simply, but got into a lot of super-fast footwork by the end. We started with a Natural Turn into a Natural Spin Turn – a pretty common and easy way to start any pattern. Then we looked at the V6 figure, first in its by-the-book form, but we ended up changing the last piece of it to make things slightly more complicated. Normally a V6 is a Backward Lock Step going into an Outside Change followed by a Forward Lock (for some reason if you string those three figures together, they are given a whole new name, even though each individual piece already has a name). Lord Junior had us take out the Forward Lock and instead do one slow step forward followed by a quick shift into Promenade Position to do a syncopated Progressive Chasse in Promenade Position.

But wait, the fun was just beginning to start there! At the end of the Progressive Chasse we did two Step Hops, which look exactly like how the name describes them. Hopping rotated us around slightly less than 90° in the process so that when we landed the second time the Lead’s back was to the wall. After that, we did another syncopated Progressive Chasse, this time one moving to the Right down the line of dance. At the end, we did a third Step Hop to turn a full 90° as if we had been in a corner and for good measure we tacked on one last Progressive Chasse, this time moving to the Left again. Because of the rate of speed we were going, Lord Junior decided to have us do this Progressive Chasse in Pepperpot timing rather than syncopated, which allowed us to put the brakes on our movement so that we could end the whole progression safely.

I am super excited for Saturday afternoon. There is going to be some big meeting that the Royal Dance Court (which I am a member of) was asked to come sit in on, allowing us to represent our dance constituents during the discussions. Since Sparkledancer and I are so much younger than everyone else who would be going to this meeting, we were both asked if we could make an appearance. Maybe to shake things up a bit, maybe to learn more about dance politics – I’m not entirely sure what we’ll end up doing. I find dance politics much more interesting than actual politics, so I’m pretty excited to go to this meeting and see what kinds of topics are brought up for the group to talk about. Who knows what kinds of exciting and crazy things will be discussed! I’ll be sure to tell you all about it next week!