I really don’t seem to do anything on Friday nights any more. I hear of lots of things going on every Friday, but by the time the day actually rolls around, normally I have pushed my body so hard all week long that the idea of venturing out and doing even more physical activity feels daunting, so I end up staying home and curling up under a blanket somewhere, usually to study things for work. When I read that back, it makes me sound so old! That’s why I haven’t had much to say about Friday nights lately. I promise to try to shake that so that I can go out and do more. Maybe I will have to make a note not to push myself quite as hard on Fridays so that I don’t wear myself out early in the evening. Maybe. We’ll see what happens.

Last Saturday night I got to go out to a party going on at the Electric Dance Hall. There was a live band invited to play, something to help people celebrate Valentine’s Day if they were going out on a date, but there were also lots of unattached women who showed up for the party that I could dance with. I did end up arriving to the party a bit late since I had a work thing going on beforehand, so I didn’t get to participate in the dance lesson that was offered. The rumor I heard was that the dance lesson covered pretty basic steps for a couple of dance styles though, so it sounded like I didn’t miss out on picking up anything I didn’t already know. Having the live band playing was a lot of fun, and is one of those things that I think everyone who knows how to dance should get to do at least once a year. True, dancing to the music of this band pales in comparison to dancing along with a full orchestra like I have gotten to do the last several years at the Grand Dance Hall, but live music of any variety just feels much more exciting than dancing along with a set of recorded songs (not that that isn’t also a lot of fun). On this particular evening, since Valentine’s Day was the next day, the band seemed to play a lot of slow tunes that made for good Rumbas, which I think might have been something that they planned. No one really called out what dance style people were supposed to use for each song that came on, but people seemed to fall in line and dance the same style that whomever got out to the floor first chose. Most of the time – there was that one couple there who thought for some reason that everything that sounded even close to a Quickstep should be danced as a Quickstep, even if everyone else was dancing East Coast Swing. They came unnervingly close to running into people a few times doing that… When I got to the dance that evening, I put on my dance shoes and then spent a few minutes walking around saying hello to people who I knew. As I was doing so, some lady ran over to me to say hi and introduce herself. Apparently she had seen me before somewhere, and remembered who I was, 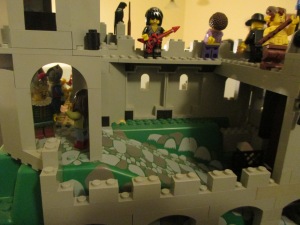 but I could not for the life of me place where we might have met, which probably makes me a bad person, but she just did not look familiar to me at all. Also, she didn’t give me any hints to help me remember where it was that we met before, which probably would have made a difference. Instead I just slunk off to the other side of the room to try to remember without admitting that I had no idea who she was. I also got roped into leading one of the line dances when the band left the floor for a fifteen-minute break. Lord Junior seems to like making me get up in front of everyone to do that sort of thing. When the line dance was over, I went over to the desk to see him and told him that he could lead things like that better than I could, but he said that he just wasn’t interested in learning the steps to that line dance, so it’s better to just make me do it for him. It must be nice to be in charge.

Latin Technique class on Monday night ended up just being attended by a small group of dedicated dancers. There had been the threat of cold weather and snow earlier in the day, which was terrifying enough to all the people in the area that they closed down the schools for the day, so it didn’t really surprise me that there weren’t more people in class that night. For those of us that were brave enough to make it out, we got to do some Samba. Despite my cool feelings toward Samba, I was having fun throughout the class, and we danced enough to certainly turn up the heat and work up a sweat. Part of that was due to the fact that one of the simplest steps seemed to be messing everyone up at one point or another during our hour of work, which would cause all of us to devolve into fits of laughter before we had to go back and retry everything. The pattern we used during the main part of class started with partners facing each other, then doing one Whisk to the Lead’s left, letting go on the right side so that we were in an open dance frame. From there the Leads took one step to the right and then shifted weight from one leg to the other in time with the music as the ladies spun across in front of us, coming out on our right side, raising their right arm into the air and offering

their left arm to us so that we could hold them up while they bent their bodies like a bow. After a brief moment holding that line, we spun the ladies back across in front of us, lining up in Shadow Position to go into a couple of Syncopated Lock Steps down the floor. The hard part came after those Locks when we had to stop and hold for two beats of music. So many times someone would either forget the hold and start moving forward, leaving their partner wondering what was going on, or the sudden stop would leave the person off-balance and falling forward. It was rather funny. If one partner forgot the hold and kept moving, it was really hard to get back in sync so the whole thing kind of fell apart there, forcing a redo. There were times where I ended up pressing down on the lady’s shoulder with my hand during the hold, both to let her know not to move, and also to help keep her in place and prevent any stumbling. That seemed to work pretty well for me (except for those times when I was the one who jumped the gun, that is…). After the hold we came out into two Cruzado Walks and then threw in some turning Voltas to round the corner, going around by turning almost a full turn to the right. We spent quite a bit of time just repeating this pattern over and over to work on getting it in muscle memory, and then get it up to speed. By the time we were done, things were looking pretty good – at least I thought they looked pretty good, and that’s what really matters, right?

Then on Wednesday night at Standard Technique class, Lord Junior kept the promise he made to us last week to cover Quickstep, and had us looking at some complicated figures to really challenge us. It’s not that the figures that he picked out were all that difficult per se, but they were the type of figures that required you to really move your feet and legs quickly in order to do them in time to the music, and they involved a lot of hopping. So much so that I felt kind of like a rabbit after doing all that hopping around during class. Most of the figures we did are considered open-level, and don’t actually appear on the official syllabus for Quickstep. We started off with a couple of Bronze-level steps to get ourselves moving: there was a prep step to get us on the right leg, and then we went into a Natural Turn. Next we did something called a Running Spin Turn, which is mostly like a normal Spin Turn, with the first two steps I did being the same, but instead of a third slow step to end the Spin Turn we took two quick steps backwards down the line of dance (which was the ‘running’ part). Coming out of that we went into a Tipple Chasse that ended with two sets of Lock Steps at the end – the first one being syncopated, the second not. The Lock Steps were very fast when done with music, and the trick was to stay up on the balls of your feet and really propel yourself

forward from your standing leg to get moving fast enough. Next up we did two Step Hops that rotated to the right. Step Hops are exactly like they sound, where you take a step and then hop on one leg with the other knee forward. Then came the Scatter Chasse, which was the figure that caused the most trouble for everyone. Before I get off on that, we finished our pattern by coming out of the Scatter Chasse into another Step Hop, which helped bleed the momentum built up so that we could stop easier. Now, the Scatter Chasse feels like you are doing a Progressive Chasse but moving twice as fast, so you don’t even have time to bring your feet together like you normally would in a chasse. After the first couple of times we all comically tried to do the figure with a partner, Lord Junior decided that we should work on getting it up to speed individually. He had us line up along one side of the floor, and then “just like gym class” he said, we would be travelling to the other side doing the Scatter Chasse. That was kind of ridiculous, and I’m sure anyone watching us might have thought we were crazy. It’s harder than it looks to propel yourself across the floor like that, moving your legs so quickly while keeping your upper body steady and level. By the end of the class, I felt like things were going OK, but it still needs work to make it look really good. I will be filing that figure away to look at later in my free time, just for fun.

This weekend I am planning on going to another dance party hosted by the Royal Dance Court that I am a member of, so yay! The theme for this party has something to do with line dances, so we will have a lesson at the beginning where someone will be teaching as many different line dances as they can fit in over the course of the hour. I hope they teach the Hustle line dance. I don’t actually know how to do that, I am sad to admit. It’s part of my heritage, I know, and certainly when I was back in high school everyone seemed to know all the steps. I just never picked it up for some reason. So, keep your fingers crossed for me that we cover that, and I’ll let you know next week if that wish comes true!