Things have to change sometimes. Mixing things up helps to promote progress. What do I even want to talk about first? Hmm… West Coast Swing, I choose you!

I’d been thinking a lot about my dealings with the West Coast Swing groupies around the area, and I realized that if I wasn’t going to be able to learn the things that I wanted to know from them, maybe I could improve my relations with them by learning those things on my own. So, with the help of a little online searching, I found there did actually exist footage of things that I needed to know. Quite a bit, actually. Using all that, some self-study is going to happen so that I can master ballroom-style West Coast Swing. At least one night a week for the foreseeable future will be devoted to learning as much of this syllabus as I can. The night chosen to start with was Wednesday night, simply because ‘West Coast Wednesdays’ sounds catchy. Really, we could do it any night of the week, but I think that even if we decided to do it on a Tuesday some week, in my mind I’m still going to call it West Coast Wednesday (no one can tell me I’m wrong in my own mind!). The idea is that if I can train myself to do this, using proper ballroom form and technique, eliminating the shuffley Anchor Step so that my style of West Coast Swing has much more fluidity and continuity of movement, maybe then the other West Coast Swing people in the area can appreciate that (even though I do things differently) I can still look good. This is something I hope to be able to achieve since people talk about West Coast Swing as a style of dance that emphasizes personal style and individuality. You would think that if the practitioners truly believed in those tenants, they would embrace the differences between ballroom style and barroom style, and wouldn’t tell me that I was doing things ‘wrong.’ Well, I’m going to go out of my way to figure out how to impress them, and then maybe I can help heal the rift that exists between the local West Coast Swing club and the ballroom community I’m a member of so that we can all dance together in peace and harmony no matter how we choose to do it. It’s a lofty goal, but I want to give it a try.

So far on this journey I’ve covered a lot of basic turns and figures, about half of which were just review to make sure I knew the names that went with the figures. I think I’ve gotten all the way through what I’ve found listed as the Bronze syllabus, so now we can start looking at taking those pieces and putting them together into more complex patterns. There’s also a lot of more advanced things to do using the Whip figure that I need to spend a lot more time going over, since that seems to be a really important figure that can be used in a lot of the really impressive patterns I’ve seen when people have shown off. Luckily, I have Sparkledancer to help me. She thinks that becoming a West Coast Swing master will also be fun, plus she’s the only female I know that knows the basics of ballroom-style West Coast Swing, so that’s really good for me. We are able to throw some videos up from my computer to my television and practice

everything in my living room. With socks on, it is possible to do all the turns on the carpet fairly easily. Once we feel like we’ve mastered the figures enough for primetime, we can give things a try when on an actual dance floor wearing our dance shoes. If we get stuck while we’re on this journey, I bet we could get help on things from Sir Steven. He was the one who taught me everything I knew before starting on this quest, so I bet he could help us work out any problems we might run into. Maybe someday, if we ever sign up for a ballroom competition and they also have open West Coast Swing heats, we can throw down and see how we do. Either that, or we could make our way out to the local West Coast Swing club’s base of operations and show them our way of doing things, and hopefully win their grudging respect for how good we are when all is said and done. I know where they meet, and it’s on my list of places to head out to someday!

Just how did I manage to convince Sparkledancer to help me out with this crazy plan to become a West Coast Swing master? Well, it’s actually kind of a trade with her. See, Sparkledancer told me recently that she has been getting really bored in the Friday classes we’ve been attending. Lately there’s been a lot more newcomers in the class than there were in the past, so she told me that she really only feels like she can work on anything when she rotates through to dance with me. I don’t have that same problem when I work with newcomer Followers, because I can (as a Lead) guide them through what they are supposed to be doing most of the time if they can move their feet correctly. So, she wanted to drop that class and pick up something else, but wanted to make sure she wasn’t stuck somewhere where there is a terrible male-to-female ratio. She asked if I could drop the class as well and pick up whatever she chooses. For at least this month, we are going to be picking up the Advanced Salsa classes that are given on Thursday nights. They are taught using club-Latin style Salsa, so there is hope that they will cover movements we don’t really know. Plus, Salsa is something we just don’t really do; generally when I am out places and a Salsa comes on, I either sit the dance out to give myself a rest, or I go out on the floor and dance Mambo instead. There is hope that, because of that, the class will be rather engaging for us to be in. After all, it is almost like a new dance style for us to go over.

I say “almost like a new dance style” because of what class was like this week when I was there. Pretty much everything we covered was stuff that I had covered in Bronze-level Mambo classes, the only difference being that we started dancing on beat one, and we were dancing mostly in a two-hand hold, not a Latin dance frame. As I’ve said a few times before, Salsa was once described to me as being ‘sloppy Mambo,’ and being in this class helped solidify the meaning of that for me. A lot of the moves we covered just didn’t feel as sharp as how I originally learned to do them in Mambo. We started off doing eight-count turns, with the guys turning on the first four, and the ladies turning on the second, switching back and forth between turning outside and inside. After that we did Cross Body Leads, with and without turns for the ladies in the 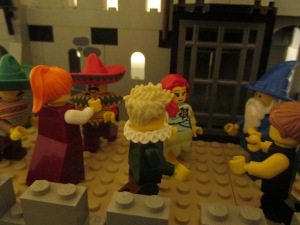 middle. Then we went over something the instructor called ‘Back Rocks’ with a turn for the guys right after the third rock, followed by a turn for the ladies on the next beat. The Back Rocks felt a lot like a Hand-To-Hand in Rumba, since we were told to let go of the outside hand while doing them. Nothing terribly crazy at this point, just slight modifications of things I’ve seen before in Mambo. At the end of class, the instructor told Abracadaniel not to let her forget that next week she wanted to go over Chases, so that gives me something to review before class to make sure I know that’s up. I’ve done a few different Chase figures in Mambo, so those should be a good baseline to help figure out what to expect next week.

This past Saturday when we got together with Sir Steven, we tried to put together all the things that Sparkledancer and I had worked on individually the previous week. Some of what we did was more successful than other things. We hadn’t had much time or space to really work things out ourselves before that time. I had talked with her about what I had worked on, and obviously I wrote about things last week (which she saw), so she had a general idea of what she would be getting herself into, but it’s hard to show someone an idea like that if you don’t have room to move without running into a wall. Running into walls isn’t that much fun, right? When we did have room to move fully, it turned out that we could do things pretty well. I’ve mentioned before that Sparkledancer is pretty tall, much taller than Lady Comrade, so since both of us have long legs, we need space, like how a Great Dane needs more space to run than a Chihuahua. Telegraphing the movements for Sparkledancer also seemed to go

pretty well – she said she could feel what I was doing and that was enough for her to respond accordingly. The problem was that when I was doing it while Sparkledancer and I were dancing a Waltz, it was noticeable to Sir Steven watching from the other side of the room. He said that it was good that I was able to implement the idea that I had been given, but I needed to practice a lot more to make it more subtle. He told me that my dance partners should be able to feel me doing these things with my upper body, but he didn’t want to be able to see me either pressing forward with my upper body or accidentally leaning forward when he watched. That would diminish some of the magic of the dance to a spectator. So, that will have to be a conscious thing I have to practice as part of mastering this concept.

With the change in schedule now, it appears that I am free on Friday nights to wander around and take in other things. Tomorrow night, for instance, I heard that the Prime Dance Hall will be having another open party that anyone can attend, so I’ll be going on a dance field trip to visit. I’m excited about that – it will only be my second time going there. Having been there once, and been regaled with the stories of the people who run the place after I was there the first time, I think this time I will be better prepared for what’s to come. Will you join me? It’ll be a lot of fun!