Last Friday I skipped the Tango class to get together with Sparkledancer and run through our routine a few times, but I did end up going to the dance party they held afterward. I didn’t want to spend all night just running through the same steps over and over again, it’s good to have some variety in there (the spice of life, and all that jazz, right?). The new girl that I spent time talking to the prior Friday came back. I think she’s been around enough times to get a name now, so I’m going to call her Deja. I think that Abracadaniel might have a bit of a crush on her. He stuck pretty close to her during the dance party, and when we went out for ice cream afterward he made a point of sitting right next to her so that they could be in their own little world talking. It was kind of adorable. I wish I was as smooth with the ladies as Abracadaniel is. Deja and I were talking at one point about the things she had learned during her time at the franchise studio she came from, and she mentioned that she never got to learn Viennese Waltz, and it kind of terrified her. I told her that I believed in her, and if I could learn to do it, she would have no problem picking it up. Lord Junior heard us talking about it, so he put on a slower American-style Viennese Waltz number and offered to show her the basics off to the side (much safer than the last time I saw someone try to

teach Viennese Waltz during a dance party). The only other people who were there that knew Viennese Waltz beside Sparkledancer and I were Jack and Diane, so the floor was wide open during that number, allowing me to really stretch my legs and have fun. Later on during the dance party, I asked Points to come do a Waltz with me, and for some reason she asked Sparkledancer to record the dance on her phone. I was told the video ended up online somewhere, but I haven’t watched it. I’m not entirely sure why she wanted to do that.

As I mentioned last week, Sparkledancer and I met up with Lord Junior on Sunday afternoon to walk through our routine with him and get his input on things. He has been super excited to work on it with us ever since Sparkledancer won that free lesson and told him that we would both show up for that, and he had been asking us when we were going to do it over and over. We kept putting it off until we had the entire routine laid out from start to finish, so we had an entire product to show him instead of just a jumble of pieces. Yet, even though we waited until we had all the sections, when we met up this past weekend we only got through about half of the routine, taking things one section at a time so he could look at and make adjustments to our shaping. When we started, Lord Junior said he wasn’t going to try to change the choreography any, but he ended up making some suggestions for changes to what we were doing which would help with making everything look as strong as possible. For example, during the opening section I basically walk from the back of the room toward the audience, 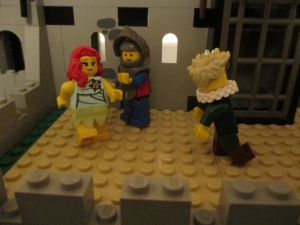 and Sparkledancer waits for a whole measure and then comes after me. She had asked Lord Junior if there was any way she could adjust some of her steps to cover more ground, since she could only catch me if I took tiny steps, but if I take normal sized steps there was just no way for her to meet up with me at the end so we could take frame. After watching us go through things a couple of times, he suggested that she do a syncopated roll in on an angle toward me when she starts rather than going straight to the right and then walking forward like we had been doing. If she pushed hard enough with her standing leg, she could start a good ten or twelve feet down the floor after that first roll, which also allowed me to walk normally without her scrambling to make it all the way down. I liked that plan, since taking small steps is weird for me (I have long legs – they aren’t built to take tiny steps). There was one other place he suggested a small change in choreography as well. During the middle section, instead of doing a simple Promenade to Counter-Promenade, he suggested we do something that looks more like an Outside Spin from Waltz. Doing it like that winds Sparkledancer up a lot more, so when she goes to pivot around and kick her leg out, the momentum from the previous figure makes it look a lot more powerful. That way, if any ninjas are sneaking up on us during the performance, they are going to be in for some serious hurt!

We met up with Sir Steven on both Saturday afternoon and yesterday to go through things with him. During both of those coaching sessions, he liked to stop people who happened to be nearby the dance floor and looked like they didn’t have anything else going on, and ask them to watch us run through things to see what they thought. I have to say, when this happened Wednesday night, it went much better than when he did it on Saturday. Probably because I was expecting it that time. Wednesday we showed him the changes that Lord Junior had suggested, and he thought they were great (before we left for the day, we made sure to set up another session with Lord Junior to walk through the second half of the routine to see what his thoughts were for that part). We ran through things repeatedly, picking apart little pieces that needed to be cleaned up. I must say, the lift at the end of the routine is looking much more awesome. I’m going to pat myself on the back for that right now. It’s not one of those things that I get to practice much with Sparkledancer. Unless I book time to use floor space at a dance hall, there aren’t many other places where I have the room needed to pick her up, spin her around and then release her back onto the floor and hope that she slides. Last night I got a chance to go through that another half-dozen times, and I am quite pleased with the amount of distance I am able to get her to slide now. I’m not sure if it was because she was wearing her actual performance skirt last night when we were practicing, or if I’ve just mastered the technique of putting her on the ground correctly without killing the forward momentum, but I was able to get her to slide a good three or four feet down the floor, which is

considerably more than I had even hoped for. Originally the slide action was going to be more of an illusion – she would be sliding just a little while I took a few steps back, so it would look like she travelled a good distance away from me. Now, I think I’m going to try to see if I can get her to slide at least six feet down the floor. Then I wouldn’t even need to walk backwards at all. I would just stand there and admire how far I was able to get her to travel before I walk over and help her stand up.

Looking back on those last two paragraphs, it occurs to me – there’s one big advantage I get when working with another amateur dancer that I think I gloss over sometimes: it allows me to spend much of my time working with male instructors. Don’t take that the wrong way – as a solo I have been able to work with female instructors, and they are wonderful for many things, but there are some things that I get from male instructors that I just wouldn’t get from a female. For one thing, all the ones I have worked with have been in the same place I am currently in once upon a time, so they know what I’m going through (I have yet to work with a male instructor who was born knowing how to dance perfectly, but they might exist). Lord Junior likes to tell me about things that he sees me doing wrong because he was caught by his coaches doing the same things back in the day. Sometimes I feel bad for Sparkledancer since she doesn’t get to have the same kind of learning experience from female coaches, but she tells me at this point that males like Lord Junior and Sir Steven still look like prettier ladies dancing than she does, so it’s OK. Someday I’m sure she will surpass them in her mind, and I promised I’d go with her to work with a female coach if she ever wanted some feminine styling pointers (I would just be a prop for a session like that).

Anyway… I’m not sure why that came to mind.

The big thing I really have left to work on before this performance is… well, my acting ability. I have a really hard time running through the routine without cracking a smile. Part of me says that it is OK for me to look like I’m having fun. This is a showcase performance, and dancing is supposed to be fun, so if I’m having fun then it is totally OK to let that show on my face. Plus, I think Pasodoble is super fun to dance, more so than most other dance styles I know. I don’t know why, but I do. However, people have commented that true Pasodoble is supposed to be serious and angry (you generally don’t go out to bullfight while laughing), so when I’m smiling like I usually do, it tends to take the edge off of the seriousness a bit. Wednesday night, when working on things with Sir Steven, I tried really hard not to smile. Sir Steven saw me, and had to stop me because he said I had a weird look on my face. I had been biting the inside of my lip to force myself not to smile, and apparently I wasn’t hiding that well. He said it looked sort of like I had increased the distance from the bottom of my nose to the top of my lip somehow. I’m not sure how I managed to do that, but I guess I was. So, I’m going to have to go back to the drawing board and figure out how to be more angry and serious during my Pasodoble. Maybe I can reach back in my mind and set free my inner animal to demonstrate that kind of emotion without devolving into laughter. I wonder what kind of spirit animal I would find in there…