So, I must admit that I came down with some version of the Death Plague that’s been going around, and I haven’t done much but sleep the last week or so to try and get over it. Since I 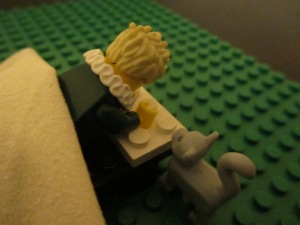 Hi everyone! I’m Sparkledancer, the Thespian’s competitive dance partner and frequent companion on dance (mis)adventures. He’s been sick this week, so he asked me to fill in. So, here I am—the female perspective of being half of an amateur couple. I suppose like any good tale, I should tell you my origin story first. I’ve always been athletic, and for a very brief blink-and-you’ll-miss-it part of my life, I was in ballet. It was dance related, I grant you, but I was about 4 years old and I was far more interested in prancing around in a tutu than anything. Team sports involving balls and goals and scoring points took up my life for the next 15 or so years, until a rather catastrophic knee injury involving surgery and rehab forced me to retire my cleats right at the end of high school. It didn’t really create a void in my life since by that point, playing was synonymous with pain. In college, I realized I missed the physical activity that sports had provided. A friend convinced me to go to some free swing dancing lessons that were being held on campus. It sounded fun and social, plus it was something I had never done. In theory, it seemed like such a good idea. In reality… it was… interesting. The class was taught by two college kids, and while I believe their hearts were in the right place, their teaching method definitely left something to be desired. They were prone to making fun of people, and I was already pretty self-conscious to start with. I’m tall, and the class attracted a lot of very short Asian men that would accidentally whack me in the head whenever they attempted a turn. A little painful, kind of amusing, and not exactly good for confidence. One week, I kept getting a turn wrong, and rather than explain what I needed to fix, one of the instructors muttered (loud enough for me to hear) that some people just can’t dance. After several weeks that rapidly become more and more demoralizing, I eventually claimed my knees hurt too much to continue. It was sorta true (mostly not), but it was a good enough excuse to get out of it. Thus ended my dancing career—over before it ever really began.

Except… the universe has a funny sense of humor. Fast forward about a decade later. One of my friends had got a coupon for some dance classes, and I got drafted into going. I’m never one to turn down an adventure, no matter how many concerns I might have. It’s entirely possible I might have had a little bit of a breakdown in the car before the first lesson. I may have had flashbacks about never being able to dance. I might have been incredibly worried that the instructor would roll his eyes at my complete and utter lack of skill and grace. There may have even been tears involved. But, I got out of that car, went into the building, and embraced the physical challenge. I haven’t looked back since. And man, what a trip it’s been! The little epilogue to my back story is that it turns out I can learn to dance with the help of a patient and talented instructor. Dancing has taken over a fairly large part my life. Occasionally, I even look fairly decent doing it.   I’m also happy to report that my little girl love of tutus and dresses and sparkles is ridiculously alive and well. I’m currently rhinestoning a pair of shoes for everyday use because, well, why not?

So, back to the present day. As I mentioned earlier, I’m a little different from other dancers out there in the fact that I’m part of an amateur couple. The Thespian and I share a private lesson with Sir Steven every week, which ranges in mood from ridiculously silly to soul-crushingly difficult. We also take group lessons together a few times a week. We both started dancing at around the same time, and made a pact when we decided to compete together to try to take as many classes together as possible. It gives us more time to practice together, but more importantly, we’re drawing from the same knowledge base. It means that when we’re out social dancing and the Thespian throws out some random move we sort of learned 2 years, I (theoretically) should know what to do. Granted, theory and reality are two very different concepts, but after a few run-throughs, we’re generally on the same page (or at least faking it pretty well). Having an amateur partner has a lot of perks. Whenever we go social dancing (which we try to get out there at least a few times a month), there is a perpetual shortage of

men. I can’t tell you how many women approach me with sheer wonder (and a more than a little jealousy) that I have a partner who enjoys dancing. We frequently stand out—we’re significantly younger than the average ballroom social dancer, we’re tall and athletic, and most importantly, we’re usually laughing about something or other. So many times I’ve struggled to keep up in a Viennese Waltz because I’m giggling over some silly joke the Thespian told or singing along to the music. When we’re out, we rarely have “dance fights” where we argue over who’s doing what wrong. Not every dance—or night of dancing—is successful, we’ve just learned it’s better to enjoy the moment than assign blame. We also put a lot of effort into our dancing. I’m not one of those tiny little dance instructors who can Jive and Quickstep all night without perspiring. There’s a reason I almost always wear black—usually an hour or so into the dance, and I’m a hot sweaty mess—happy, but moist. Since the Thespian and I have been partnered together for almost 3 years now, we’re very comfortable dancing with each other.   You kind of have to be, considering how close a hold we keep in the smooth dances. We periodically beat each other up (I’m particularly guilty of kicking the poor Thespian on the inside of his arch, or knocking knees with him). I also have a lot of trust in him. When we first started dancing, the idea of floorcraft was terrifying. I’d see people coming towards us out of the corner of my eye, and freeze up (or try to avoid them). Of course, the Thespian wasn’t expecting that, so it would throw him off as well.   A few years in (and a LOT of practice later), and I’m significantly better about just letting him do his job and lead. And every now and then, magic will happen where we just fly around the dance floor, effortlessly weaving around the other dancers. Those are the moments I love. In our lessons with Sir Steven, we’ve been practicing a lift. The first time we had a lift (back when we started dancing), I was incredibly hesitant about jumping into the Thespian’s arms—I was concerned I’d knock him over, or he’d drop me, and other sorts of scenarios with painful outcomes. Now, I have no hesitation leaping into him (perhaps a little too enthusiastically—I’ve currently got some rather impressive bruises, and I’ve been known to yell “Trust fall!” before charging at him). I know he’s got me, and I think that trust shows in our dancing.

It’s not all puppies and sunshine in an amateur couple. When we compete, it’s just the two of us out there. If one of us does something weird, there’s no pro to rescue us. In a pro-am couple, the pro is there to show off the student to the best of their ability. With us, we only can rely on ourselves to look good.   If I get off time or don’t follow something, it’s up to us to fix it. Sir Steven once told us that watching his amateur couples dance is incredibly stressful as an instructor. It’s pretty much sink or swim. The other real downside is when we practice, sometimes we practice things wrong. We misremember a step, or it just doesn’t seem to flow right. Maybe I’m starting off on the wrong foot, the timing is off, or the Thespian is a step behind where he should be. Since we don’t have a pro there to step in and fix it, we’re stuck trying to work things out (that’s where the real dance fights are!), looking up things online to try to figure it out, or just leaving it alone until the next lesson. It’s frustrating, but it’s part of the trade-off. I know many people prefer to only dance with a pro. It makes senses. That instructor knows all the steps, which means the amateur can accelerate their own learning since they’re only focusing on their own part. Not only that, the instructor is there to make the student look good while they’re learning—there’s no awkward moments where both the lead and the follow are learning their respective steps, stumbling around trying to get in synch. While I’m sure both the Thespian and I would be dancing at a higher level if we only danced with a professional, there’s something incredibly satisfying about moving up the ranks together. We truly know our parts—there’s no one helping us through it. Every step we do well, we’ve earned.

Learning a new skill as an adult is a hard sell. It’s difficult to willingly put yourself in a position where you don’t know anything (and you’re going to feel foolish not knowing it), and then work through those doubts. I really like the idea that dancing has no end point—there’s always something else to learn or improve upon (as Lord Junior tells me EVERY. SINGLE. TIME—push off the standing leg!). It’s frustrating and hard and sometimes I question why I put myself through this, but then I go out on an adventure and I fall in love with dancing all over again. It’s been such a strange, weird, and wonderful trip down this ballroom dancing rabbit hole. I’ve had so many odd and crazy escapades, and the eclectic groups of people I’ve met along the way have become good friends. If time travel were possible, what would my younger, demoralized-by-swing-dance-instructor version say to current day me? I would hope after my younger self has gotten over the fact that I can dance (and I have a partner that’s tall enough to not hit me in the head during a turn! Bonus!), she would turn to me and ask very seriously, “Where did you get those rhinestone shoes?”