Since I missed the previous Friday’s International Rumba class at the Electric Dance Hall because of my excursion to the Prime Dance Hall, I thought I would be a bit behind when I showed up this past Friday. Turns out that they hadn’t gotten very far while I was gone past what we had been doing the last time I was there. This group class turned out to be a real struggle to get through, more so than I thought it would be. We were continuing to look at things one could do coming out of Fan Position, which as you know is fairly common in International Rumba. This time we went over the Hockey Stick. The hardest thing I had to do was convince the ladies that they had to hold in place over beats four and one. Many of them thought that since they were walking along a curved line like a hockey stick, they would just start walking without stopping until they completed the hockey-stick shape. As you can imagine, this was throwing all kinds of things out of whack. One lady was different though. She really liked to start walking directly from Fan Position, without collecting her feet and changing weight first. I could do half the basic, lead her out into Fan Position, and then even if I made a point of emphatically pushing back toward her with my arm as I did my forward check to try to keep her from moving forward, she would just start walking toward me. At one point I even put myself into the ladies portion of Fan Position and showed her how to collect and shift to the other foot.

While doing that, all I could think was the time in one of the Latin Technique classes I had taken months ago where Lord Junior made me do the lady’s footwork with him leading so that I could feel what was supposed to happen to show me how to lead it properly. If he hadn’t done that for me, I wouldn’t have been able to show her what to do with her feet. It took several rounds of her switching through all partners for her to finally get it down, but I want to believe my demonstration helped her along the way somehow. If it didn’t, then I was just awkwardly doing the lady’s footwork for giggles I guess. Maybe that was the key! Watching me showed her what not to make it look like! I don’t make a very good girl…

Do you ever feel like you have to perform when out social dancing? Like as soon as you take to the dance floor, people are watching everything you do very intently? That happens to me a lot. I can’t tell if they are watching me, expecting me to do something really amazing that will blow their minds, or expecting me to screw something up really badly. Maybe they are hoping for a bit of both – that I pull off really advanced figures with style and pizzazz, but then mess up the basic footwork somehow (this actually happens frequently). Now I know that I stand out a lot when I go out to social dance parties around the area. I’m usually at least ten years younger than the next youngest person, I’m fairly tall (not a giant, but taller than average), and I’m usually laughing about something that I did wrong while dancing, so it’s hard to miss me amongst the crowd. I don’t think that I’m really trying to draw attention to myself. After all, I’m just there to have fun, like everyone else. Invariably though, I can look around the room and see people watching what I do. Especially when I dance with Sparkledancer, who like me is younger than most everyone else at the parties in the area, and she’s also taller than the average female. On top of that, since we’ve danced together and studied together for so long, there are figures that I can use dancing with her because I know that she knows them. When I choose dance partners whose background I don’t know, I tend to stick to a small subset of figures that I know in each dance style, things that are fairly basic or easy to follow, which ensures that I am successful dancing with any partner. With Sparkledancer, I can use more complex figures, along with things that we have learned for many of our competition routines, that wouldn’t necessarily be known by others. So I know the way I dance with her tends to draw attention. Why do I bring this up? Well, the dance party at the Electric Dance Hall this past Friday night after the International Rumba class was a lot like that. It seemed like much of the time that I was there, people weren’t really dancing, but were watching every time I took to the floor. At one point I even felt like I had to put more into what I was doing than I normally would during a social dance because it felt more like a performance. When I invariably messed things up, because I tend to do that enough when I’m just dancing for fun, it felt a lot funnier with everyone watching than it probably really should have been. Hopefully people remember what I was doing because of the fun I was having, not because of the things I messed up.

HotDog was saying again that night how bored he was of just doing the basic steps over and over again. I tried to help him out at one point when a Foxtrot came on, showing him how he could upgrade his basic and do the Quarter-Turns to weave down the wall in a ‘W’ pattern, but he stopped me halfway through and said that he could travel backwards, so the second half of the Quarter-Turn was right out. That didn’t make much sense to me. I tried to tell him that if the basics were too boring, then that was the next step up and it wasn’t too hard if he would just give it a shot, but I couldn’t get him to try it 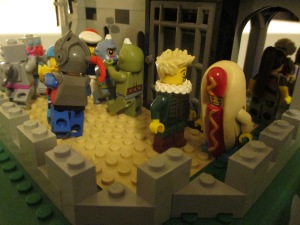 out for himself. I can’t tell if he’s reached that point where he’s gone over so many things for so many different dance styles now that he’s having trouble keeping everything straight. He’s been around for a few months, so he has been exposed to a lot of different things at this point, and I think the only time he really practices is during the classes he is in and during the social dances he attends. I remember back to my first few months of dancing, and how frustrating it was not remembering things and not really being able to practice because of a lack of space and willing partner. I must have gone through the same sets of newcomer-level group classes an unbelievable amount of times before things finally set in. I didn’t want to tell HotDog that at the time though. Hopefully he sticks around until he gets over his current hump and things start to get clearer.

Saturday during the afternoon I met up with Sparkledancer and Sir Steven at the Endless Dance Hall to work on things. I’m told that things are starting to look good, which is hard to believe. It feels like no matter what’s going on, I’m getting picked on for doing something out-of-place, so doing better is hard for me to see. Still, Sir Steven pointed out that where he used to have to stop us often to talk about things like Contra-Body Movement and Contra-Body Position during our Foxtrot and Waltz routines, now we seem to do those kinds of things all the time. Some days when we are going over lots of other things, I don’t think I even put any thought into CBM or CBMP, so the fact that I am able to make it happen when it’s supposed to without even realizing it is awesome. And we are able to go through more and more of our routines every time without stopping to fix every little thing, so if we are gauging things by the amount of material covered we are starting to do much better. I wish the same could be said for the position of my head. Apparently, even if I am thinking about keeping it where it is supposed to be, I end up with it in the wrong place much of the time. I can’t figure out why that is. I feel like I am trying so hard to keep it in the right spot every time someone mentions that it is in the wrong place. Sometimes I wonder how much better my dancing would look if I just did not have a head. One less major block of weight to worry about, one less extremity to keep in alignment, and most importantly, one less thing to get picked on for while practicing. Sure, I would have to sell any hats I have lying around, but that would be a small price to pay.

It’s a creative solution to solve a vexing problem.