I have replaced my Latin shoes. They were getting to the point where they were no longer giving me comfortable grip on the floor, no matter how much time I would spend brushing them, so I finally went to go see a man about fixing that problem. A while back I mentioned that I had wanted to look at replacing my ballroom shoes, but it turns out that my Latin shoes were the more problematic of the pair (or ‘pair of pairs’ as I guess the case would be), so they got replaced first. This is actually only the second pair of Latin shoes I’ve ever had, the first pair having served me well since I got them over a year ago now, so I can finally retire my old shoes to be used solely at home for practice while my new shoes take their place, which is living in my car so that they are always on hand if I ever end up someplace to dance. I have some skepticism about how these new shoes will work though. They are from the same maker as my old shoes, which is nice, and originally they had a much higher 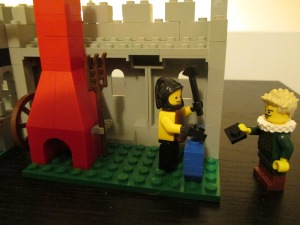 starting price point than my last pair, which I assume means that they are a higher caliber shoe (I am naive about shoe-related things, so forgive me my assumptions). They were on sale for a quarter of their original price, which is a feature I like when I look at buying expensive things. I think the main reason for this is that this model if shoe is being discontinued – my other clue to that is because there were only two sizes available to choose from. One of the sizes was half a size smaller than what I usually get, and I was pretty sure that would work for me, so I got them. I just couldn’t resist the deal. The left shoe fits perfectly snugly, but the right one is just a few centimeters too short length wise for me to stretch out my big toe completely right now. There has been some work with a wooden dowel, a bag of water, some wadded up newspaper and a freezer to try to force the leather to stretch quicker than it would through normal usage, but it still hasn’t quite reached perfection yet like the left shoe. The heels in this pair are also a quarter-inch shorter and set back farther than my other shoes, so the few hours of practice I’ve done in them so far has been interesting. The front edge of the heel is placed right across the middle of my actual heel, so it feels weird to dance in. I don’t think I’ll have a problem once I’m used to the way they feel, and I hope I can break them in enough to use them during the upcoming competition. Once that is over, I promise that I am going to finally get new ballroom shoes. Promise.

While we’re talking about dance apparel, I also had a talk with Sir Steven recently about what I should wear for the upcoming competition. I’m lucky, considering I’m not going to have to get anything new to wear. Men’s dance attire doesn’t really have much variation to it, so if I already have a suit that will work for ballroom dances and an outfit that works for Latin styles, I can pretty much reuse that for all eternity if I really want to (I’m an amateur, so I’m allowed to do that). But someone once wrote about dance apparel being a lot like armor, and everyone knows it’s always good to be on the lookout for better armor than you currently use. We talked about things I could get to improve my outfits for next time if I wanted to go that route instead. For instance, did you know that they make suit coats that are

specifically designed for ballroom dancing? Normally if you’re wearing a suit coat, when your arms are raised into proper dance frame the coat’s material bunches up on top of your shoulders. The extra material is there to make it comfortable for a man to keep his arms at his sides, since there would have to be enough material to cover the curve of the shoulder. I mean, if you see a guy wearing a suit for a job interview, do you see him walking around with his arms raised to be level with his shoulders? In a ballroom jacket, that extra material is removed so that when your arms are up in proper dance frame the jacket lays almost flat from the top of your shoulders to your elbows. There is enough extra material included so that one could put their arms at their sides, but I’m told that this is not the most comfortable thing to do, so guys usually take the jacket off when not dancing. The idea of having a jacket specifically designed for this kind of blows my mind… it makes perfect sense when explained why someone would have designed such a thing, but I never would have thought of it on my own. Looking around for one though, they tend to be kind of expensive – more expensive than the amount of money I’m usually comfortable dropping on clothes that won’t get much use. So, I’ll stop by the armor shop around the bend, but it will just be for window shopping. For now.

As I mentioned last week, this past Friday night there was a big party being thrown to celebrate the anniversary of the opening of the Endless Dance Hall. Since it was a free party, there were a lot of people there. A LOT. It seemed like people from dance halls all around the Dance Kingdom had given up on their usual Friday night activities to come out and party and eat free snacks with the rest of us. After all, who doesn’t like free snacks? There was really good fancy potato salad, and this thing that looked like cheesecake but was kind of orange flavored as well as cheesecake flavored… anyway, I might have had some snacks. It was a good thing, too – I didn’t skip working out before attending the party, so I needed the calories to help me make it through the night. There was a lesson at the beginning that covered basic Cha-Cha steps, which was good because, since it was a free party, there was a huge

number of people who had never danced before. I ended up sitting out for most of the lesson just to watch what was going on with Jack and Diane and Sparkledancer. There were all kinds of fascinating people who had shown up – from a guy that had what looked like a mullet, to the lady that had brought along some kind of extendable arm that allowed her to take selfies from angles that her normal arms were incapable of achieving, to the ever-present random old man who had to stop by and talk to the group of us “kids” about what it was like to dance when he was our age, and how much fun it looked like we were having compared to everyone else. I’m sure you’ve met that guy before. It’s always a different old man, but they all seem to tell the same stories. Everywhere I go, there always seems to be one…

For the most part, while dancing that night I managed to get through the routines I set out to memorize over the week before this party. The Jive routine, since it was rather short and repetitious, went really well. The Tango had a few challenges, but I believe I got through it without slaughtering the routine too badly by the time the night was over. When I danced a Waltz or Foxtrot with Sparkledancer, it was a struggle to go through some of the more elaborate figures without running into the sheer mass of people on the floor. The Samba was the same way – there were a couple of times that I pulled Sparkledancer to the outside of the floor to attempt to run through our routine while others were going through the line dance in the middle of the room. We could get through all the figures without modification or veering too much off course until we hit the Running Promenades. Because of how

fast they move, and how our long legs allow us to cover a lot of distance, we usually had to skip those entirely because there always seemed to be a slow-moving gaggle of people right where we wanted to go. So instead, after we’d get through the Reverse Turn Samba Rolls, if it didn’t look safe I would just go back to the start of the routine. It makes me wonder how well that figure will work during the actual competition. If there’s a large mass of people on the floor during that dance style, will I have to throw that figure out and skip back to the top again to avoid becoming a train wreck? I guess we’ll find out soon!

With another week gone, the competition is even closer now. I heard that the venue is all set now (since they managed to deal with the minor dragon infestation they had). Looking over the schedule, Sparkledancer and I will end up being there for just one day – all of the rounds we’re doing happen to be on the same day, lucky for us. That means that the only reason to hang out for more than that would be to watch others dance. All our routines are set, leaving us with the remainder of the time between now and then for a bit more refinement and practice. Other than that, we’re now starting to get prepared for battle. We talked over our plans for making the trip there, and Sir Steven offered us a ride, but it didn’t turn out to be what I expected. It’s not too far from my house so I think I’ll drive myself to the party. 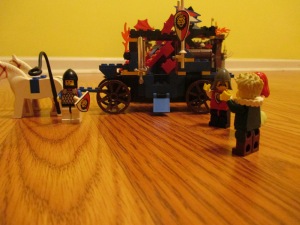 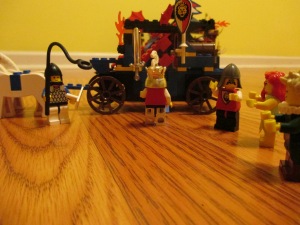 Speaking of taking myself to parties – apparently National Ballroom Dance Week has been this week! That’s a bit of a misnomer, since everyone who has explained it to me has said that Ballroom Dance “Week” is actually ten days long. Anyone else going to any exciting dance events this weekend? The Electric Ballroom is having a live band come play on Saturday night, so that’s where I’m going to be. It’s been a while since I’ve gone to dance at a party with a live band playing. There’s another party coming up in mid-October where there will be a full orchestra playing for the event, and I’m planning on being there for that as well. Whatever you’ve done or are planning on doing to celebrate this (ten-day) week, I hope you get to be out dancing as much as me!