Probably the best thing I got out of this past week came from the Latin Technique class that I attended on Monday. We went through a pattern that Lord Junior said he likes to use as a way to warm up. Often times, as he told us, people get to competitions, and the organizers will open the dance floor early for people to do some practice before the event. A lot of people will get out on the floor when it opens, and then not really have any way to warm up. This may be more true for people who dance Pro-Am than people like me who have another student partner, since I have seen the way all the Dance Lords and Ladies will congregate before competitions to talk together. Without a partner to dance with, how does one begin warming up? To answer that, Lord Junior went through a pattern for Rumba that you can do solo, one that covers many of the techniques (if you put some effort into it) that are probably in your routines. I’m going to tell you the pattern we went through, mostly because it forces me to write the pattern down so that I have a way to remember it later…

To start, stand on your left leg with the right pointed behind you. Next you’ll do two sets of forward Latin Walks, stepping with the right leg first (should be an eight-count, if you have music). Then there will be Cucarachas, right side then left. Follow that up with a Three-Step Turn to the right, then one back to the left to put you back where you started. A pair of Switch Turns is next, these two go left to right, unlike everything else done so far. Two Chasses are next, going right first then coming back left. These are done by changing weight on count one, bringing the legs together on count two, and then stepping out for counts three and four of the figure. Once you finish the second Chasse, you rock back on the right foot and then do a Hip Twist (yes, even guys can do Hip Twists in Rumba) to turn around

180°. Now you’ll do one full set of Latin Walks back toward where you started (a four-count walk), followed by a forward Switch Turn that ends with you taking a step back with the left foot. To start over, you can either do a collect movement with a weight change like ladies do when out in Fan Position, or if you don’t know how to do that (if you’re a guy like me, you probably don’t know how to do that very well) then you can substitute a rock back with the right foot to start over at the Latin Walks.

Seems simple, right? Now as you practice it, think about your hips. Since this is a Latin dance, keep in mind the whole time that your hips should never be square, except for that brief moment they have to be as you pass your legs when walking. If you can get past the hips, try throwing your arms into the mix. The arms here are just an extension of the upper body, so they should alternate a lot when walking, or doing the chasses. Pull them in toward your body when doing the Three-Step Turn to spin yourself faster, but make sure when you stop that you don’t slide. The whole routine is deceptively difficult to do well, even though it seems simple. Give it a try to see how you fare while doing it!

I did it earlier tonight before posting this to make sure I could remember the order, in case you were curious.

Speaking of warming up beforehand… competition! We’re halfway through September now, which means it’s almost October! That means this thing is happening soon! The clock is running down, so the pressure is on. This competition isn’t going to be held at one of the Dance Halls around town, like many that I’ve done at the past. Looking at the brochure for the place, it looks like I’ll be heading out to the Dance Death Arena to face off against people from far and wide. In some ways, getting judged at a competition like

this sort of reminds me of how it feels when getting caught up in one of the mixer-dances that they always seem to have at the large social parties that I go to from time to time. If you are in line for the mixer, and you end up getting paired with someone who didn’t learn to dance from the same Dance Hall/Franchise/Dance Lord as you, there’s no way to know if things will go well or end poorly. Was the syllabus I learned comparable to what everyone else is actually doing on the floor? Will a judge be able to see where I learned to dance when I’m placed on the floor to compete alongside a range of other students who learned other places? Will he take into account all the things that different franchises or even different Dance Halls within a franchise focus on when teaching, and know that I will be strong in some things and weak in others? Or am I just going to be a number that won’t even really have a name associated with it? I’d like to believe that by the time I’m done competing at this event, other people will know who I am. I’ve been told that I’m “entertaining” to watch dance. Usually people mean this in a good way too! But looking good in public doesn’t necessarily translate into looking good for a judge, who will probably notice things that I screw up that other dancers wouldn’t. I guess I’ll have to come back and reflect on these questions after I get home from the Dance Death Arena with my scores.

At this point, we’re pretty much done building everything that we are going to use during the competition. Tuesday night while it was raining heavily, we were putting 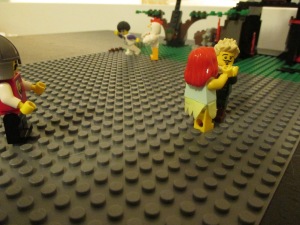 together the remainder of our American Tango routine and we mapped out what we would do for Jive. The Jive routine seems a bit short, but if we can get the pattern memorized quickly we could potentially add to it. Right now we have ended it in a nice spot where we can repeat the figures that come after the initial throw-out. The initial throw-out is one of those fancy style ones, so going all the way back to the top and repeating that just wouldn’t look right. It looks better as an introductory move than it does as something that shows up in the middle of a routine. We also made an official plan for our Viennese Waltz, though we still did not run through it because of the people on the floor at the same time. The Viennese Waltz will be left to my discretion – the figures I was told to limit myself to using are the Natural and Reverse Rotations (obviously), forward or backward Change Steps, and then I was told to occasionally throw in a figure that is a combination of a Cross-Body Lead with Explosions and Cantor Pivots at the end of a long wall when I could. If I can do it safely at the end of every long wall, I can do it to give us a chance to pause the spinning and collect ourselves. If not, it wouldn’t be a huge deal, but I need to do it at least once per heat, otherwise we might as well be doing International Viennese Waltz, right? So, now there will be another week of endless repetitions to make sure that everything is in memory for review at our next meeting together. Even if we get everything memorized by this weekend, I doubt there will be many changes between now and the competition. There isn’t much time left to polish what we already have, let alone add more things on to the routines.

This Friday night all classes at most places around town are cancelled. The Endless Dance Hall is having a big anniversary party to celebrate another year of being a destination for dancers in the Dance Kingdom, so they are opening the doors to anyone who wants to come for free. No one else really wanted to compete with that cost, so most of the Dance Lords and Ladies are going to go attend the party with any of their students who are also going. I’ll be there. I hear they are going to have free snacks, so it was easy to convince me to go. Plus, I can practice my routines with Sparkledancer and any other unsuspecting lady I dance with on the massive floor there to see how well I’ve memorized them.

If you’ve got nothing else planned for this Friday night, you really have no excuse not to show up!