Last Friday I went over to the Electric Dance Hall for their group class and open social dance that was going on. The group class was American Waltz, but whomever made the schedule labeled it as “Beginner/Intermediate/Advanced American Waltz” so I wasn’t quite sure what I would be getting myself into. A bunch of people who I knew showed up to take the class along with me, but we also had a handful of ladies in class that hadn’t done American Waltz before, so everything that we went through was pretty remedial. There were Natural and Reverse rotations, both with and 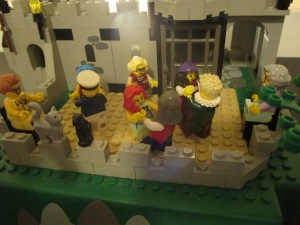 without a ladies turn at the apex of each, and we also looked at Open Change Steps, with two different turn variations to choose from. One was a ladies turn only, with the guy holding on with the left hand throughout the entire figure. The other was with solo turns for both the man and woman. These steps sound pretty simple, especially if you’ve done them before, but by the time we finished up with the class, several of the women had opted to sit out in chairs along the side of the dance floor and just let those of us who had done American Waltz before go through everything. We did manage to convince some of them to come back out on the floor during the social dance afterward to make up for things. The dance was pretty relaxed, and I once again dragged Bony out on the floor for every Cha-Cha song that I could grab her for until we left to go get some ice cream. I hope that all my effort means that she is starting to like Cha-Cha now. If not, I’ll probably still continue to take her out for those songs, because it amuses me highly.

Sunday afternoon there was a tea dance going on, planned by the dance organization that I happen to be a member of. This event must have been a lot like a book, since they kept calling it a “multi-chapter” dance party. With some award show happening around the same time, the theme of this dance party was movies, and all the tracks that the DJ played were from movie soundtracks. The venue for this dance field trip, which we’ll call the White Dance Hall, was a bit of a drive from where I live – not the farthest distance I’ve ever travelled to take part in a dance, but it certainly ranked up there. Only a few of the regular group of dancers I spend time

with ended up coming along because of the distance. The White Dance Hall was a bit misleading – on the outside, it looked to me like the place would be really small, but once you entered the door things veered off to the right on an angle to where the dance floor lay. The floor wasn’t as big as the floor of the Endless Dance Hall (but then again, no dance floors I’ve ever been to come close to that size), but it was larger than many other places that I’ve been to – about the size of a competition dance floor. The party drew in people from all corners of the Dance Kingdom, so having a large floor was a benefit. The organizers had asked Lord Junior to come and give a short opening lesson before the social dance. He went through a simple figure set that would work for both Waltz and Foxtrot: a Natural Rotation with Hesitation. The hardest thing that we did during the short class was the partner rotation. I was off on the far left side of the room, and the ladies were supposed to just move one partner to their right every time they were told to switch. There were two couples on my left that did not switch partners though, so every time people were told to rotate, the ladies got confused and many would walk off to the side of the dance floor rather than skip over those two couples and come dance with me. I felt a little silly waving my hands around to try to get their attention without shouting.

We had fun dancing after the lesson was over. With the sheer number of people who had come from all over to participate in the dance, it was really hard to use the time to practice routines, since there always seemed to be someone who wanted to stop right along the path I would have been using. So Sparkledancer, Jack, Diane and I just took the floor by storm. We had to be the youngest people there by a good twenty years, so we stood out quite a bit. At one point I was sitting off to the side, watching as Jack and Diane were navigating around during a Quickstep, and a realization came to me: most of the time when I go out dancing for fun, I usually end up a sweaty mess by the time the party’s over, but a lot of other people I see don’t. I know that Jack and Diane are the same way, and so is Sparkledancer (we often dance together, so it’s easy to tell). Being so young, you can see that when we go out on the floor, we really put a lot of effort and energy into each and every dance we do. A lot of the other people, especially the older crowd, they really don’t. I don’t know if it’s because they don’t want to, or because they physically can’t do it, but it seems like that’s the big difference. People notice it though. We had so many people this past weekend come tell the four of us how fun we were to watch dance together, and we even had one older guy come tell us that he wished that he was forty years younger so that he could dance like we could once again. And getting compliments like that is something that happens at a lot of dance parties that we “kids” attend, and I wonder if our tendency to leave it all on the dance floor has a lot to do with that. 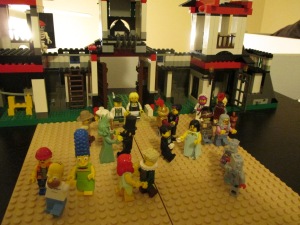 Maybe I’ve been going about being a dance ambassador all wrong. So far, I’ve been trying to talk to people and tell them how much fun it is to be out dancing. Maybe the best way to really get people interested in coming out dancing with us is for all of us to go out and… just dance.

While at the dance party on Sunday, The Prez mentioned in her announcements that there was some kind of confidential thing going on at one of the dance halls that many of us go to. The announcement was cryptic at best, and I almost wrote it off as something that I wouldn’t need to worry about, but as it turns out it directly affected my plans the next day. I had hoped to go out to the Latin Technique class at the Electric Dance Hall on Monday, to make up for my not being able to attend the week before due to the holiday. In the afternoon I got a voicemail from Lord Junior saying that he was calling everyone on his list to let them know that class would have to be cancelled for the night, and he went on to divulge everything about this confidential thing in the short message that he left me. Apparently this well-known-television-show-about-dancing had made plans to use the Electric Dance Hall to film some segments, and due to a scheduling conflict they were unable to get to the dance hall in the early afternoon like they planned, so they booked the place for the whole evening instead. Since I don’t watch a lot of television myself, I did not know

one of the two names that Lord Junior stated in his message to me, but I knew who the other person was, so it makes sense that they would have to push things around to give them the studio without any of us being around. So, maybe I will have to make a point to figure out which episode of this show they were filming so that I can see what they would have done to this place that I hang out so often in order to make it ready for primetime. I don’t know if it’s really a secret like the announcement on Sunday said, since there were pictures taken that are now out there for the public to see. I managed to stumble across them without trying, so it wouldn’t be hard for other people who are actually looking for such things to see them. We’ll have to see if this is just a one-time thing, or if it will happen again in the future.

On Tuesday Sparkledancer and I met up and worked on our American Smooth routines with Sir Steven. Our Tango routine is now three-quarters of the way done, though when it is actually finished it should run longer than two minutes when dancing to the average Tango song tempo. We also discussed what the Viennese Waltz will look like, but with all the other activity going on that night on the dance floor we didn’t attempt to run that. The routine will not be anything specific, just a guideline on what figures to use while traveling around the floor. Things like the actual number of rotations we would do will all depend on the number of people on the floor during the heats, and the size of the floor where we’re competing. We also ran through our Foxtrot and Waltz routines a number of times to work on cleaning some things up. In the Foxtrot, we spent quite a bit of time working on the correct

body position to use during the chasses that are in the routine, and in the Waltz we fixed the rotation that was at the end of the Fallaway figure. We kept trying to default to the style of rotation we had been doing before we changed the routine, since we had practiced that so much it just felt right. The rotation we are doing now is much simpler since it’s no longer open choreography, but it just doesn’t seem to stick in my brain as well. I shouldn’t complain though, for as much trouble as I have remembering how that turn works, Sparkledancer actually has the harder part of the turn. I think I have that down now, but I’ll have to see if she’s free this weekend to practice it a bazillion times to make sure that it overrides the previous figure in my memory completely.

Next week Sir Steven promised that we would finish the Tango up and then work out our Jive routine, and possibly run the Viennese Waltz once or twice if there is room, and then we should have everything ready to go for the upcoming competition. Then we’ll just have to practice until we wear tracks into the ground somewhere, and we’ll be totally fine. With only a couple of weeks left to go, it’s getting to be crunch time now!

2 thoughts on “What’s Going On On The Floor?”