This past Monday night I ended up going to a Latin Technique class that Lord Junior has been holding all month. I was a bit nervous going into it, since this was now the third Monday of the month and it would be the first time I actually made it to the class, but I was assured that the class doesn’t have the same continuity expectation to it that a class focused on a specific dance style would. There were four of us attending class this week, and as we sat getting our dance shoes on before things began Lord Junior came over and asked us what we wanted to work on that night. We had the choice of Rumba, Cha-Cha or Samba. He said that we could go over Jive if we really, really wanted to, but one of his students, a girl I’ll call The Prez, flat-out said no to that, and no one really argued with her. The rest of us had no strong feelings one way or the other for what would be best to go over that night, so Lord Junior put Bony on the spot and made her decide, so we ended up doing Cha-Cha. Since there weren’t enough men to work on things very well in pairs, he put together a number of figures in a line-dance fashion that we could loop through to work on improving our technique for the simple steps. We started off dancing the figures at a slow pace, and he threw down the gauntlet that if any of us could get the sequence down well enough (using the proper technique) up to tempo by the end of the hour that he would refund our money for the class for doing so well. My problems that I got called

out on came down to two main things: I wasn’t leaning forward over the balls of my feet enough while rolling my hips forward at the same time, and I would often try to take large steps, which increased the amount of time I needed to do each figure. The syncopated checks that we did were a good example of that. The farther my feet got from each other as I checked forward, the harder it was to keep time with the music. I’m not sure if I would have taken such large steps if I had a partner in front of me, since I would have run into them if I had, so I’m going to pretend that was the reason I even had to worry about that particular issue during the class. It made for a nice evening, lots of mindless repetition in front of a mirror with someone watching and correcting things that we were doing wrong, without paying the much higher cost of having a personal coaching session. I’ll do my best to go again next week and see what else I can pick up.

This week was also the start of actually making definitive choices for the next competition I would be doing. Sparkledancer and I sat and discussed the upcoming October competition rules and categories before and after our coaching session with Sir Steven on Tuesday night, to try to figure out what we wanted to do. Prior to that night, the only person who had really spent any time looking at the guidelines was Sparkledancer. Sir Steven had brought up the competition and I had expressed interest in it because it was geared only toward amateur pairings (which Sparkledancer and I fall into). After going through things, Sir Steven decided to look at initially fitting us into the closed routine categories containing International Rumba and Cha-Cha, Samba and Jive, and either open or closed routines for American Waltz, Foxtrot and Tango. Based on how I initially read the rules, we may have to start with all closed syllabus routines and earn enough points to move up to open choreography, but Sparkledancer has since found a paragraph in the rulebook that contradicts that idea, so I could be wrong. Sir Steven is going to review everything and see how our Waltz and Foxtrot routines work with what he wants us to do over this weekend, so he can make changes to things if need be and show us the changes next Tuesday. This competition is coming up quick, being in October, so if we really want to do it, we need to have our game plan in place sooner rather than later. I think that we won’t be alone in heading out to this event though – in discussing our October plans with Lord Junior earlier this week while at the technique class, he mentioned that he actually has our friend Mister working with one of his female students to do a couple of amateur routines for this event as well, and he is working on another married couple he works with to see if they want to go also. Competitions are more fun if there are other people you know going, so that makes this exciting. 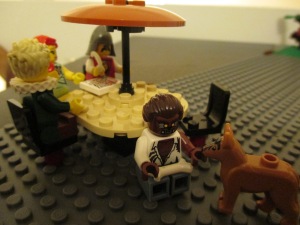 This will be our first foray into a competition outside of the safe confines of the franchise dance studio environment, so there’s a part of me that feels like I am going from a well-known fish in a closed off pond to a virtual unknown in the wider Dance Kingdom dancing sport ocean. Without having another non-franchise competition that I’ve done to fall back on to soothe my nerves, there all kinds of questions and… insecurities, for lack of a better word, that flare up about this event in the pit of my stomach from time to time. Lord Junior really likes to compete, so when I listen to him talk about events he says to just go out and do it, whether you might feel ready or not, because it is better to go out on the floor and gain the experience than to wait until you feel up to it and miss out on a chance. So, I’ll be throwing my hat into the ring for this, or else it will be too late and I’ll wreck my biannual competition schedule that I’ve been on for the last few years. I really don’t want to mess with tradition, after all. That would throw my entire dance world all out of whack.

Because we will be going into the competition for the four International Latin dances in closed syllabus, we also went back over our Rumba and Cha-Cha routines Tuesday night and Sir Steven removed the few pieces of open choreography that we had in there so that they wouldn’t disqualify us. In some ways, changing the figures all back to being pure syllabus choreography feels like getting back to the way things should be. The Cha-Cha hadn’t actually been finished yet when we started to review it, so making changes in that shouldn’t screw me up too much. To keep things simple, we used what we were doing in the Rumba as the basis for building the Cha-Cha routine, with a few modifications to accommodate for figures that are exclusive to each of the respective dances. The new routine also has a bunch of stuff added on at the end that the Rumba does not, with the

idea being that when we finish going through the routines to music, they will both cover about a minute and a half. Since Cha-Cha is danced at a much higher tempo than Rumba, the routine has to be longer, obviously. In the Rumba the changes were few, but since I’ve spent so much time practicing the routine already, getting those few changes to fit into my memory is going to be a bit of a task. We had to simplify the hockey stick figure that was in there, to put it back to syllabus format of the figure rather than having the fancy shadow position walks. We also took out the crazy stuff that we were doing in the middle of the natural top figure – originally we would start the natural top, and then after the first part of the rotation I would lead her through an inside turn into some rotating swivels while still circling like a natural top. We just cut all of that movement out, ending the top after the first part of the rotation to go into the figure we had been doing afterward. Our Samba routine may come out of this unscathed, but we’ll have to review the listing of syllabus figures for the level of Samba we want to compete in to make sure that all of the figures we are doing are allowed. The running promenades and the Samba rolls that we have in there may be higher level figures that we’d have to cut out, depending on if we go in for Bronze of Silver. We’ll get final word on that next week when Sir Steven finishes reviewing everything and figures out what level he thinks we should compete in.

Until then, there is so much going on this weekend! There’s a social dance Friday night at the Electric Dance Hall, and then there is another open social dance on Saturday at the Endless Dance Hall, and then on Sunday Lord Junior has some famous coach guy/professional dancer/world champion in assorted things from a big city up north coming down to give a workshop on Cha-Cha. His name does not sound familiar to me, since the names of famous professional ballroom dancers usually go in one of my ears and out the other, but many of you would probably know who he is, I’m sure. Are any of you going to be attending any of these events this weekend? If so, there’s a good chance that’s where I’ll be too!

3 thoughts on “I Feel A Change, Back To A Better Day”