Friday night I went and hung out at the Electric Dance Hall, as I am wont to do of late. They were having their biweekly dance party that I was interested in attending, but I got there earlier to sit in on the International Cha-Cha class that they were holding right before the dance. It was Cha-Cha, so I wasn’t overly excited to go to class, but I need to work on convincing myself that it’s OK to get over this loathing of the dance style, so I went anyway. The class was small – only three ladies, myself and Lord Junior. It was nice in a way because everything that Lord Junior mentioned about the male part had something specific to do with me and what I was doing wrong, but it was also a taste of what was ahead in the night when the dance party would start. We focused primarily on the basic techniques of the figures we were working on. The figures weren’t difficult by themselves, most of it was just a New Yorker to a triple chasse, another New Yorker to another triple chasse followed by solo 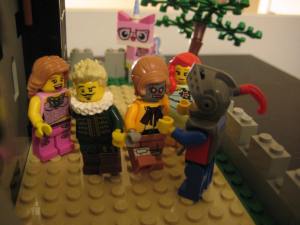 turns. There was a lot of emphasis on what steps or movements we should each be taking in between each of the beats in the music. Normally these movements are extremely fast, so they get lost in the speed of the dance, but we were told that if we could distinctly make these movements in between each of the major movements on beat, it would impress any judge that might be watching us at a competition. Near the end, just for fun we tacked on a fancier spiral turn right after the solo turns, but that turn fell apart as we tried to dance up to tempo with a normal Cha-Cha song.

Class wound down, and Sparkledancer and I remained out on the dance floor to work on the techniques and figures we had just put together. The other ladies wandered off with Lord Junior, eager to follow his advice about grabbing a glass of wine before the dance started. Still others began to filter in from outside and put on their dance shoes to join us. For a good half an hour or so, Sparkledancer and I stayed together, trying to practice things we hadn’t gotten around to during the week. Most of the people at the dance that night were female though, and there were only a handful of other male dancers, so the women without partners were all sitting on the couches in the back watching Sparkledancer and I practice. It was rather quiet in the studio, even with the music playing, and I could feel their eyes on us as we worked through our routines. Finally, we decided that we really needed to help liven up the party, so we made plans to practice another time and then split up to pull the newcomers out on the floor. Don’t get me wrong, I don’t mind being stared at while I dance, but it is much easier for me to entertain people up close, so I had to dance with everyone I could and get them to laugh and talk, otherwise they would have remained sitting in the back being quiet all night (or so I told myself). I took opportunities to take breaks from dancing when there were line dances playing – the few men that were there besides me sat out during those as well, so I figured the women could all dance together without me getting in the way. There was one women at the dance who really surprised me. I took her out to the floor early on as I was trying to get the party started, just dancing a simple East Coast Swing with her since I didn’t know anything about what she knew and most of the ladies there I was told were still working through newcomer-level classes. Later on, she came and asked me to dance a couple of dance styles that I was surprised that she knew – one International Rumba song she asked me if I knew Bolero, and another slow swing song she asked if I knew West Coast Swing. Lucky for her, I happened to know both, which made me feel pretty cool.

Since we really hadn’t gotten much of a chance to get together at a Dance Halls and work on our routines most of the last week, this past weekend Sparkledancer and I met again for lunch near a retail village that has a mixed-use commons area between the streets. It was really warm out that afternoon, but we took to the green beneath the trees and spent a long time running our completed Foxtrot, Samba and Waltz routines to really get them committed to memory. We had lots of people stop and watch (or smirk), but since there was no art fair this time we were mostly left to ourselves to work without any creepers hiding behind the bushes. The passersby that seemed most interested in what we were doing were a group of young girls. Their 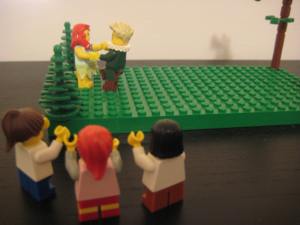 mother had parked along the side of the road near where we were practicing, and the three girls were rolling down and hanging out of the windows of the car watching us intently. After some time, when their mother finally got off the phone, they all disembarked to head off to whatever shop they were going to. I could tell that they wanted so desperately to come talk to us, but whether they were too shy or their mother told them not to, they never did. So we just kept on going, working on looping the routines all the way through a few times to confirm that we could (as best we could in tennis shoes on uneven ground, of course). Hopefully all the people passing by feel like they got a good show out of our antics.

Monday night I was back at the Pasodoble class. This week we started from the top of the music, with a set of Spanish Lines that have the men and women mirroring each other standing some distance apart. This opening figure allows us to do quite a bit of free movement, compared to how things started in my last routine. We don’t actually come together until fourteen beats into the song. We had a few chasses in the choreography that we were working on, and at one point I made the mistake of trying to curl my left arm over my head while doing the chasse to the right. This is how I had done it in my last routine, so it was something I did without even thinking, but Lord Junior stopped me and made fun of me for doing that. Apparently I had forgotten that the arms are supposed to be making shapes based on holding a cape, and if I were to curl my arm holding the cape over my head and chasse to the right, I would be walking right into the path of where I was trying to make the bull run. I had never really thought about the arm placement as something to help me avoid being gored, but I’ll sure never forget that now. Lord Junior was telling us that this has become his favorite class to teach, because while we manage to get a lot done, we still sometimes screw up, and every time we manage to screw up hilariously. I hope he’ll consider keeping the class on the schedule for next month as well so that we can continue to work on things.

Recently, it seems that Lord Junior and Sir Steven spent some time talking, and Pasodoble came up. Lord Junior told Sir Steven all about the choreography that he has been working on in class with us. During our coaching session this week, Sir Steven had Sparkledancer and I walk through the figures from the class so that he could see how we did them. The first time through, I completely blanked on what I was supposed to be doing. Sure, we had just gone through everything the night before, but I didn’t realize there 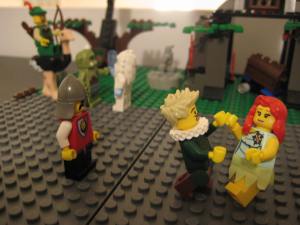 was going to be a quiz, so I hadn’t yet committed things to long-term memory. After that, running through things got better. Sir Steven seemed to approve of the initial choreography that we had been working on, and said that we could use that as a starting point for our Pasodoble routine with only a few modifications down the line. That means that we now have everything up to the first timing change done (assuming I can remember the figures going forward, that is). It was a Latin kind of night, so on top of the Pasodoble we ran through the Samba and modified some of the choreography to make the ending flow better, we went through the Rumba and cleaned up a few of the movements, and spent a great deal of time on the beginning stages of what will be our new Cha-Cha routine. If we had looked at Jive as well, we would have covered everything!

After we wrapped things up that night, we sat and talked for a while about the plans for our next competition. Sir Steven said he was looking to have us ready to go for something in September. We’re going to work hard on getting 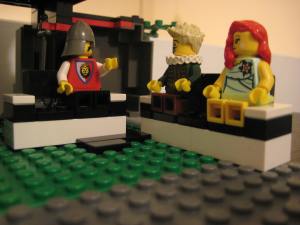 all our routines choreographed quickly, then start refining them before actually taking them out to be judged. The plan right now is still to stick with the American Smooth and International Latin categories unless something crazy happens (we’re certainly not going to do all 21 dance styles again, no matter what). So far, with the work that we did that night, we have Foxtrot, Waltz, Samba and Rumba finished, and we have started working on the Cha-Cha and Pasodoble. That puts us about halfway through getting the choreography together. He also said that the nice thing about waiting until at least September is that it would give him a chance to confirm with some event organizers that there will be other non-Pro-Am pairs dancing in the events. After the weirdness that happened at the last competition, he wants to give us a chance to dance against some other Amateur couples to see how we can do. This also keeps me from having to get over my fear of competing with a Dance Lady. I know it’s a stupid fear, but I enjoy dancing with someone who only knows as much as I do, where I don’t have to feel totally stupid when I mess things up. After all, I mess up all the time, so it’s better not to feel totally stupid when it happens, right?

Maybe someday I’ll compete with a Professional again. Maybe, but doubtful. Who knows what the future holds…