With the competition out of the way, I decided to change up my normal routine a bit to see if some change would help me progress a bit more. Lord Junior at the Electric Dance Hall had told a whole group of us at the last dance party we attended there that we were welcome to come jump into some of their group classes. With a new month starting and a new lineup of classes being offered, I saw that Wednesdays there would be an intermediate/advanced International Viennese Waltz class. I really enjoy Viennese Waltz, but it is one of those dance styles that is really hard to practice. None of the rooms in the townhouse where I live are big enough to really practice traveling dances without hitting a wall, and often times when I am at one of the dance halls around town to practice there are always too many people on the floor to safely work on Viennese Waltz rotations without worrying about hitting someone. So I signed up to attend the class this month for practice, and I can say that I’ve really been surprised how 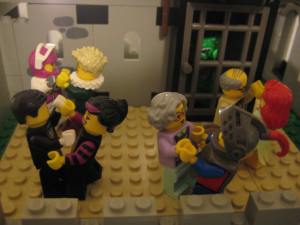 much more I’m getting out of this class than just a scheduled chance to practice on a larger floor. For instance, has anyone ever told you that during your rotations, you do not put your heel down on the second step? That leaves the foot ready after the third step (where you bring your feet together or cross your feet, depending on the rotation direction) to start the next rotation. I had never been told that before until the first day of the class last week, so I’ve always closed my rotations with both feet flat on the floor. Sure, it’s going to take me a while to get that simple change to become a natural action, since I’ve spent so long doing it the other way, but I can see the improvement in how fast I can get my legs to move when I get the action right.

There’s also some retraining that will need to happen just because I am learning from a different instructor. Over the last several months when training for the competition, Lord Fabulous was really big on adding a lot of body sway when doing Viennese Waltz, so much so that he told any of us that he was working on Viennese Waltz with that when we were taking that side step during rotation, our bodies would line up to make a straight line from the tip of the toe taking the side step to the top of the head. Lord Junior has now, for the two weeks I’ve been in his class, told me that swaying my body this dramatically is not really appropriate because when I’m stepping with my left leg it causes my head to move to the right, which is “invading your partner’s space.” He kept trying to get me to keep my head left, and as much as I tried I couldn’t figure out what I was doing that was causing my head to move, until he recorded me doing it and I could see the body sway that no one else was doing right away. I can keep my upper body and head in one place if I am thinking about my upper body, but then I always forget about trying not to put my heel down. Having two different things to focus on is too (or two) much to think about while moving that fast, since I usually rely on my body to move based on muscle memory when the song is rather fast, I think I’m going to need some more practice. Luckily, Sparkledancer and Jack also decided to attend the class with me this month, and they have the same problem, so we can all work on fixing it together. That’s what friends are for – helping each other undo your weird Viennese Waltz habits!

Sir Steven has also been keeping me busy these last two weeks. I am still meeting up with him on Tuesday nights, and I think I’ll stick with that time slot for the foreseeable future. It works out well for both Sir Steven and Sparkledancer, so unless I find some kind of non-dance social life that has events on Tuesdays, we’ll just keep to what has been working. With the shadow of the last competition no longer shading our steps, Sir Steven is already working with us to build routines that we will use at the next competition… even though we haven’t actually discussed and decided on where we want to compete next. He has ideas, and he’s mentioned a few upcoming competitions that he is interested in working with us towards, but other than those brief name drops I haven’t heard more about them, so I can’t even figure out if I’m interested in doing them or not. Yet even without a date to work toward, we have already started our preparations. Last week we started with American Foxtrot and Waltz – in the Foxtrot we took our basic reverse figure and modified it to make it more interesting, which allowed us either to extend the reverse figure to cover the entire long wall or to move into shadow position to do natural turns to the other corner. This week we started working on one of the short walls to connect the pieces together. In the Waltz we did the same with our basic fall away figure, modifying it to make it cover much more of the floor to almost reach from one corner to the other. This week, we also talked about what we wanted to do for the non-ballroom sections. Sir Steven thinks that, much like the last competition we were in, we should focus on International Latin styles to complement our American Smooth routines. To that end, we started working on the Latin style that I struggle the most with – the Samba. Right away, he wanted to work on the figure that I had delighted so much in skipping during the last competition (the running promenade) and to teach us another, equally difficult travelling figure he called the ‘Samba Rolls.’ As he was 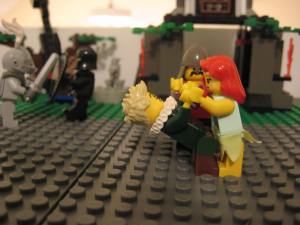 explaining that figure to me, I could swear I had seen someone doing it before somewhere, but couldn’t place where I had seen it in my dance memory, but later I found online videos of people doing the Samba Rolls to give me an idea of what they should look like. I can’t say that I’m going to be able to look like that anytime soon, but I like a good, athletic challenge, so I will work toward mastering it someday. Doing it last Tuesday night in the quiet dance hall with Sir Steven watching, it looked kind of… sad. Ah well, everyone has to start somewhere, right?

In an odd turn of dancing events, I went to prom recently. Before you ask: no, I was not some teenage girl’s date (I think at this point I am a little too old for that). Sparkledancer had signed up to help chaperone at a school prom, and they were still looking for even more volunteers to help, so she talked me into signing up with her. This, of course, also gave us the opportunity to look really cool dancing together occasionally in front of all the high school students, which is what sold me on volunteering with her. Sure, much of the night I spent wandering around the outside of the dance floor and watching to make sure that the kids weren’t doing anything inappropriate. They all seemed to be well behaved, and there were enough “adults” in the room that it should have deterred any inappropriate behavior from all but the most determined teenager (note: despite how old I am, I don’t always feel like I’m really an adult). Occasionally though, when the right song would come on, I would gather Sparkledancer and we would dance together to impress, oftentimes with a gathering of kids pulling out their cell phones to record what we were doing. At one point, a Samba song came on and I really tried to get all the kids standing near me to do the Samba line dance with me, but they weren’t interested in dancing, they just wanted to pull out their phones again and record other people dancing. If they had just followed my lead, I could have taught them something useful. I will say that it was nice to be one of the coolest people at prom this time around and have everyone watching me, because it sure wasn’t like that when I was in high school. Though, I would have thought teenagers would know more about some kinds of dancing than I did, but apparently that assumption was false. For instance, I was walking by the hotel ballroom to go grab my dinner when the DJ had put on the Wobble, and from what I could see no one on the dance floor knew how to do it! They were all standing in a big clump in the middle of the dance floor just wiggling back and forth. What is wrong with the youth of today? I’m sure you all feel the pain of that discovery along with me. Had I had the time to stop, I would have shown them the way, and lead them through the Wobble line dance, so as to right this societal wrong and restore justice to the song. Sigh… kids these days…

Even as I tell myself that I’m going to back off from dancing so much for a short while since the competition is over, I still seem to do a lot of dance related things. I heard that there was going to be an intensive Samba workshop this coming weekend, and since I am going to be working on more difficult Samba-related things with Sir Steven, I am thinking that I probably need to attend that for some intensive help on my basic rhythm bounce, and maybe they will even give me some pointers on doing better cruzados walks (Samba really does have the most fun dance words, doesn’t it?). So much for taking a step back, huh?

3 thoughts on “Show Me Whatcha Got”