At some point in the near future, I feel like exhaustion is going to catch up with me and make all of the dancing I have added into my schedule difficult. Let’s hope I can push that off until the beginning of next month.

This past Saturday was a test of my endurance levels. I was invited to attend an open dance party that evening at a new dance hall that hadn’t even open yet. They had recently finished putting the place together, and wanted to have a party to let everyone in the Dance Kingdom stop by, see their facility, and dance together for fun. It was a really nice place, and they had more room out on the floor than we have at the Land of the Loft (but obviously nowhere near as big as the Endless Dance Hall). With the number of people in the building that night checking the place out, it was really warm in there. I had already done a large amount of physical activity that day before coming on the dance field trip, since had I spent several hours at the Land of the Loft in the morning practicing routines with Sparkledancer, then had a coaching session to go over a couple of new routines with Lord Fabulous before running through a faux-International Standard championship round, and then I went to do my normal Saturday workout that afternoon before going to the party. With all that activity, it felt like my core body temperature was up really high before I even walked into the party, and it just never dropped back down to normal

until long after I went home that night. The party was a lot of fun, especially after I gave up trying to practice my competition routines with any person I danced with and just relaxed. I had thought going into the evening that I could use it as a good opportunity to practice, but the sheer number of people on the floor kept throwing everything I was trying to do out the window, so eventually I just had to give up. One of the funny things I saw while dancing around the room was that the bathrooms were labeled “Lead” and “Follow” – I’ve never seen signs like that at any other dance hall, and it got a well-deserved chuckle out of me. Next Saturday they will be having their actual grand opening party at this dance hall, and our little group of people from the Land of the Loft were all invited to come back for that. I’m sure I for one will be back to this place for future events – it’s much nearer to where I live than any of the other dance studios I spend time at, so it makes it appealing to check out what kinds of classes they offer during an average week (after the next competition is over, of course. I don’t want to make any changes to what I am currently doing until after that).

I can officially say that I have now checked off and put together everything in the American Smooth, International Standard and International Latin categories. We added in the last two Standard dances on Saturday, leaving us with only the four 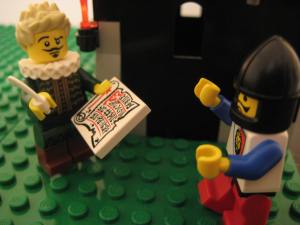 American Rhythm dances to finish the choreography for. If I can push things as planned, I hope to have those routines at least put down in writing by the end of this coming Saturday. If I can do just that much, everything will be ready to practice at any time with any partner (that knows the figures, obviously), so I can just spend the last three weeks inside of an inspirational training montage to get everything down. I found out on Wednesday night that Lady Q was going to be out of town this weekend because of a family issue, so Lord Fabulous is going to talk to her and see about getting me the American Rumba and Hustle routines she had put together that she would have taught to Sparkledancer and I on this coming Saturday. I’m feeling better about things now compared to where I was a few weeks ago when I wasn’t sure that we would get through everything. The Latin/Rhythm dances still need a lot of work, but the ballroom ones are feeling fairly good right now. For some reason, all of the choreography for the Standard/Smooth dances has been sticking with me more easily than everything else. That is entirely the opposite of how things usually go in my head. Usually I struggle with the ballroom dances, and have an easy time with Latin and Swing dances, but right now it seems all topsy-turvy.

The one ballroom style dance I will mention that I am struggling with is the International Waltz routine we just finished. No, it’s not because the figures in it are difficult, or the order of things is hard to remember, or the technique is giving me trouble – it’s because some of the figures used in the choreography I was given by Lord Fabulous just seem… wrong. For instance, every time I do a reverse rotation, I am supposed to do a lady’s turn during it, and for most of one of the long walls I am supposed to do open change steps. When I was originally taught the differences between International and American ballroom dances, I was told one of the major things was that in International styles you are not permitted to break frame. That seemed like a fairly simple rule to keep in mind, but now that rule is being turned on its head by the use of these figures that break frame in a competition routine. While working with Sir Steven on Tuesday night, I walked through the choreography with 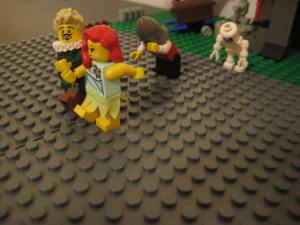 him to ask his opinion on things, and he kind of just shook his head sadly at me. I don’t know what to make of that. I do know that comparing the two, Lord Fabulous always prefers things that are much flashier and showier when he puts together dance routines for people, because he likes to be the center of attention and get everyone to watch what he has done. Throwing in things like this that are so different than what everyone else is doing on the floor would surely draw attention, so it makes sense that he would want them in there. But I have always been told by everyone, including Lord Fabulous, that Sir Steven is the man who knows the syllabus the best in the Dance Kingdom (and holds certifications to prove that fact), so if he tells me something isn’t right, then I have to believe that it isn’t right. What do I do about it? I don’t know how I would get marked by a judge for doing crazy moves that are strictly American-style during an International-style heat, but I can’t imagine that it would earn me a good score.

The thing is, I do know that some things we have learned recently are wrong. Quickstep is a good example. One of the figures that we have in the Quickstep routine is the tipple chasse. We went through the figure in last month’s Quickstep class with Lord Fabulous, and then it ended up in our routine on Saturday, but it seemed awkward every time I did it. Turns out, it was just being done wrong. He taught it by emphasizing the ‘tip’ part of tipple – essentially leaning to the left or right like a teapot pouring while doing two rotating chasses. When I looked the figure up online, and when I had Sir Steven look at it Tuesday, I found out that there is not a lot of body tilt in it, and the chasses do not rotate, and one of the chasses is actually supposed to be a lock step. I don’t know if they were trying to teach a simplified version of the figure by doing it like that in the syllabus for last month’s class, but when I tried the correct version it seemed much easier to me, so ‘simplified’ doesn’t seem like the best way to describe things. I have to believe that both the Internet and Sir Steven wouldn’t lie to me, so I plan on doing the figure in the manner they showed me rather than in the way Lord Fabulous taught it to us.

Luckily, International Standard is not our focus, so I can worry about it but not feel bad about doing something wrong or changing things in the choreography. The same can be said about the American Rhythm dances – sure, I’m going to push everyone to give me the choreography they are imagining this weekend so I can work to get things memorized, but during the competition if I don’t remember things I will probably just say something quietly to Sparkledancer and then go out on the floor and fake my way through the heat. As long as I keep moving, it’s only two minutes of feeling stupid, followed by running over to the notes I am planning on writing up and storing in my phone for review. I can be sneaky about things. If I work on everything really hard all month, I shouldn’t have any problems, but I always like to have a recovery plan in case everything flies out of my brain at the last minute. I’ve been thinking that to help with my recovery plan, I need to start studying the habits of strong leaders to help me through situations where I deviate too far from routine. Maybe I should reach out to Peter Cullen to get some thoughts on what the greatest-leader-of-all-time would do if he danced instead of transforming into a truck. Maybe with his help, my dancing could become more than meets the eye…

One thought on “Dare To Believe You Can Survive”