Things are starting to move faster now that we are approaching the end of the month with so much left undone. Sometimes, it feels like my days are bleeding into each other with so much dancing going on. Last Saturday I had scheduled a double lesson with Lord Fabulous to help drive things forward, and we certainly made good use of the 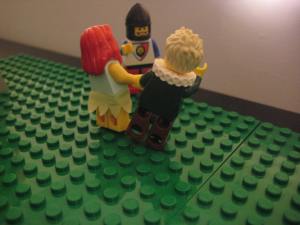 time. We completed a routine for American Tango, which fills out our American Smooth dances for the championship round, and started filling in the gaps in our American Rhythm dances by finalizing the Mambo and working through the East Coast Swing. With those three out of the way, there are only six that we have left to do: for ballroom styles we still have International Waltz and Quickstep, and for American Rhythm we still have Cha-Cha, Hustle, Rumba and West Coast Swing. That’s it! From what we did this weekend, I feel like I have the Tango down for sure, while the Mambo and East Coast Swing still need some time to be memorized. I’m feeling pretty good about things still, though time is running out, but I think that next time I decide to do a competition I’ll either have to make sure that I decide to do less styles overall, or give myself twice as long to learn everything. My preference is not to have to try and cram everything at the end like a high school student studying for a test. The probability of me forgetting everything due to watching a hilarious cat video online is pretty high if I try to cram (hilarious cat videos take priority in memory over… well, everything).

Talking with Sparkledancer about the amount of time I’ve been attending classes versus spending time with her practicing everything, I floated the idea of skipping more of the classes that are going on in April to focus on practicing all our routines. I think I read that next month would be East Coast Swing, Tango and International Foxtrot on the nights that I am usually at the Land of the Loft. I think (maybe) I could meet Sparkledancer there for classes and just hang out on the other side of the floor to run routines instead. The problem with the plan is that I am one of the few men that they usually have in class, so if I decide to skip out, there really isn’t anyone else to replace me. Maybe instead of hanging out at the Land of the Loft to practice, I should see how hard it would be to get into the Endless Ballroom to practice, so that I could avoid Lady Q giving me those sad eyes of hers and making me feel guilty.

We tried practicing like that at the Land of the Loft as a test run when Sparkledancer and I met at the studio tonight for Hot Tottie’s class that we both usually attend on Thursdays. We took up some space in the corner with the class going on over on the

other side of the floor, and Lord Fabulous teaching a lesson to some newcomers in one corner. It was nice to sit and work through things. While Lord Fabulous was teaching, we kept to American Rhythm and International Latin styles, switching on and off between something that I knew the pattern for and something we hadn’t gone over enough to have in memory. Honestly, it was good for me to practice while other people were in the building and could watch – it made me work harder at it than I would if I were at home stepping through things myself with no audience. When the first class was over and the fitness class began, Lord Fabulous didn’t have another lesson going on so we were afforded half of the floor, so we managed to fit in doing some International Foxtrot and American Tango as well as the Rhythm and Latin styles we had already been doing. By the time the second class was over, I had worked up a good sweat. We had to call it a night at that point, since there was a larger class starting and Jack and Diane had a lesson with Hot Tottie that would have taken up all the room we did have. As I changed back into my street shoes, Lord Fabulous came over and thanked Sparkledancer and I for practicing like that where everyone could see. He said that it was nice for the newcomers that were there to see us working, so they could use that for inspiration. I didn’t think it was all that worthwhile to watch, since we kept stopping and starting every time we both messed something up, but I guess it looks different to people watching from the outside.

Tuesday night when I met with Sir Steven we looked over our American Smooth dances. Sparkledancer and I asked him a bunch of questions about the American Tango routine we just put together, trying to smooth out a few figures that we felt flowed

together uncomfortably. For instance, originally we did this promenade pivot and after coming out of it we were supposed to separate and get side-by-side to do two change-of-place turns, but every time we finished the pivot and opened up, it was really awkward. Half the time one of us would lose our balance and wobble, no matter how much core strength was utilized to keep that from happening. Sir Steven told us that we could always finish the pivot, start a new promenade to bleed the momentum safely, then do a check to open up before the side-by-side turns. After going through that a few times, it seemed much more natural, and there was no further falling over. I must say, I really like having more than one person working with us on the choreography of these routines. It has really helped them feel natural, and look much more polished.

As we wrapped up things that night, he told me that we needed to make a point of getting our remaining ballroom dances done next, so the plan for next Saturday is to ask about the International Waltz and the Quickstep. If Lord Fabulous doesn’t want to give us the choreography, Sir Steven said he would teach it to us. I know that Lady Q is already putting together some choreography for Hustle and American Rumba for us to do and plans on giving it to me on April 5th, so that only leaves American Cha-Cha and West Coast Swing to figure out. If I can push to get those at least in writing from everyone by the 5th of April, that gives me three weeks to get everything practiced and perfected. Can I make it? Is the rapid pace that I am setting going to overwhelm my dance partner? I hope not! I know Lady Q would be willing to step in, but it makes me nervous competing at the Pro-Am level for some reason. Plus, it’s much harder (and way more expensive) to find time to practice with her…

Final deep thoughts for the night: Sometimes I read through things other people have posted online, compare them to the things that I write about, and I wonder if I really have anything to offer to the conversation about ballroom dancing that other people would find interesting. My ramblings about the crazy dance adventures I go on seem out of place when compared to the things other people write about. I don’t give a lot of background to who I am; the things I write about aren’t meant to be very inspirational; I don’t have some kind of overcoming-adversity story to go along with my dancing… I dance mostly for fun, and because everywhere I go to dance there are always men wanted. Then I record it for posterity. Sure, I am a male in a female dominated world, but that perspective has been much more well-written about by others I have come across. Without some kind of dance drama, I mostly think I sound like a crazy beginner stumbling through a world that is much more glamorous than I’ll ever be when I write. I do enjoy getting dressed up and pretending to be fancy as much as the next person, but if you ever found yourself dancing with me (or next to me, if you’re a guy), I would spend just as much time trying to get you to laugh with me as I would trying to work on dance technique with you. It’s just my nature, and because if you really look at what we’re doing, it’s kind of absurd when you think about it, isn’t it? What other hobby would you spend time wandering around wearing so many rhinestones and sequins (guy or girl) and not look out of place? I sometimes hope that for all the seriousness other people have while learning to dance and writing about their journey, they also take the time like me to laugh a bit about that absurdity in this whole situation. If you do forget to laugh, and you’re ever in the area, come out and dance with me and I’ll make sure to point it out to you for a chuckle.

4 thoughts on “Days Connect Like Boxcars In A Train”