I am of the opinion that it is getting close to time to invest in a much nicer pair of dance shoes. So far, I’ve gone for relatively inexpensive shoes since I’m still at a fairly low level in the dance journey. However, I use the ballroom dance shoes that I own so much that I wear through them in about eight months. My current pair of ballroom shoes have hit that point now, and are starting to come apart. My Latin shoes don’t get used nearly as much, so they are still in pretty good shape. I only wear the Latin shoes on nights when I know for certain I won’t be doing anything other than rhythm dances, because the tall heels make taking heel steps weird. The ballroom shoes work fairly well for everything, so anytime I go out to a social dance those are the ones I grab. This weekend I think Sparkledancer caught me with the heel of her shoe and it tore some of the leather along the bottom. It’s been glued back together so you can only tell it’s torn when you look at it up close, but who knows how much longer they will last, and if they get caught in the same spot again they are pretty much done for. So, I got some recommendations while I was out at the Endless Dance Hall Tuesday night working on my technique, and I’m going to start looking at something completely different than what I’ve been using up until now. They are probably going to cost two to three times what my last set of shoes cost, but I’ve been told they should last two to three times as long even with heavy usage, so it should come out even in the end. Breaking in a new pair of shoes is never fun, but it has to be done I guess. It’s really hard to turn while dancing barefoot, after all. Believe me, I’ve tried. My feet stick to the floor too much without shoes on, so it hurts when I spin. Although, I haven’t tried coating the bottoms of my feet with butter yet…

This past Friday night there were a crazy amount of people who came for the Friday night social we usually have. Some of them seemed vaguely familiar, like I had seen them in passing before, but many were newcomers to me. Our last Paso Doble class of the month was relegated to the far side of the long wall in order to make room for the other class that Lady Q was running. The last Paso Doble class was nice. True, I had to play dance dummy again to demonstrate everything for everyone, but I’ve been doing that all month so it wasn’t strange at this point. Lord Fabulous started the class by asking if anyone was working on a routine for competition. Since Sparkledancer and I were the only ones who raised our hands he told everyone they were going to do our routine with us, rather than just throw out some random order to the figures he would make up on the fly. That gave me an opportunity to do some extra practice with the routine with a bunch of different partners. Of course, we only really got through one long wall, and merely thought about starting the second. With the number of people attending the class on the other side of the studio, there were bodies in the way that prevented us from turning the corner and continuing the rest of the routine.

Everyone stuck around for the social dance afterward, so the dance floor was like a crazy sea of people. We didn’t do too many ballroom-style travelling dances. A large number of the people there were only in their first couple of weeks of taking lessons, so the things they were doing were pretty basic when they were out on the floor. Often times, when 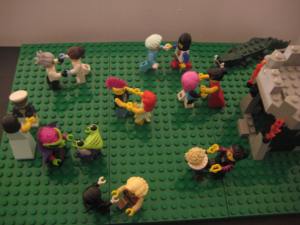 they didn’t know what to do, they would end up standing in the line of dance looking around at everyone else on the floor rather than moving, so traveling dances would have been extremely hard to get through safely under those circumstances. I spent a fair amount of time just talking with people that night, helping them remember the basic steps of the dance styles and dancing with many of the newcomers to help them feel more at home. Most of what was played that night were songs for Hustle, Rumba, and East Coast Swing. We also seemed to do a lot of line dances that night, I’m guessing because they are easy to teach and quite repetitious, and in the Land of the Loft it’s really hard to sit out on the sides during a line dance without someone going over and dragging you out on the floor. Though there were so many people there when the social dance started, almost everyone had left before the dance was over, so we didn’t have a chance to invite all the new people out to get dessert with us after the social was over. Next week, if all the people are there again, I should make a point to talk to them about our normal after-party before they all take off early. If I don’t, I would be a failure as a dance ambassador, and they would come take away my dance ambassador card, which would make me sad.

My competition coaching session with Lord Fabulous this Saturday was really early, and I didn’t really feel awake when I got there. He wanted to start with International Tango as a warm-up, so I did my best to go through everything. After completing that, we moved on to American Viennese Waltz, and that’s where things went downhill. Doing Viennese Waltz after only being awake for less than two hours is not exactly the best way to start the morning, so the first couple of laps felt pitiful. I got picked on a lot for not standing up

straight enough and not keeping my right shoulder rolled back. We spent some time going over making sure every time we opened up the arm extensions pulled as far as they could from the chest all the way to the fingertips. I couldn’t get my arm and my brain to agree on a lot of things, so I just made a mental note about it and decided to do my best and come back to it later in some evening when I am much more awake to practice. By the time we finished up with the Viennese Waltz, it had certainly done the job of waking me up completely, but I don’t think I got much out of doing it that morning. Had I started as awake as I finished, it probably would have looked a lot better, but oh well. I should take away from that exercise the fact that competitions are full day events, right? I need to learn to be at the top of my game at any time of the day (when it’s time to dance, of course). When we finished toiling through Viennese Waltz, we moved on to run our International Rumba routine a few times. This time, Sparkledancer seemed to be having trouble with the routine, much like I was with the Viennese Waltz. Once we wrapped things up, I decided to skip Lady Q’s fitness class and invited Sparkledancer to go out to get a late breakfast with me to try and make up for struggling through the morning.

We also had a coaching session with Lady Q scheduled for that day after the newcomer class finished up. We came back to the studio during the middle of the newcomer class, and decided to use the time to get some practice in to go over what we had done earlier that morning, since I was feeling much more awake at that point. Jack and Diane were already staking out the far corner doing some practicing of their own, so we thought we wouldn’t be too distracting to the class if we ran through some things too. Little did we know that our plan would work against us… during the newcomer classes, they always go through three styles of dance. This class, they started with Waltz, and once they finished up going over the basics Lady Q surprised everyone by calling Jack and Diane out of the corner to demonstrate some more advanced Waltz figures. Sparkledancer and I stopped what we were doing to watch and cheer them on, but when they finished Lady Q looked over to where I was standing and told me not to run off because we would be next. She 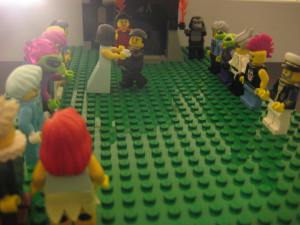 switched the class over to take them through Cha-Cha next, so in a panic Sparkledancer and I decided we had better go through our International Cha-Cha routine before we were dragged out to the middle of the room. I have this love/hate relationship with being put on the spot to show off for newcomers like that. On the one hand, I know that most things I do will be over their heads, so they will automatically think I look super cool. On the other hand, I’m afraid to mess things up knowing that I’ll never get to try again and fix it. When she finished going through things with the class, she called us up and told us to show off the figures she had just been teaching them, and how those figures could be attached to all sorts of other things in the future. I made it through everything without looking like a complete idiot, I think, so I’m going to pretend that it was successful.

When we backed off to the far corner where Jack and Diane were standing, the class switched over to Merengue for their third style. As the adrenaline of performance filtered its way out of my system, all four of us just talked quietly in the corner rather than do any more practicing. Mostly we discussed the inspirational dance posters that were hanging on the wall, and the best way to get away with adding mustaches to the people pictured in them without anyone noticing. Those ladies in their fancy dresses would look even better with mustaches, don’t you think?

2 thoughts on “Now Shoulders Back And Stand Up Tall”