In the final International Waltz class we had last Friday, I felt like more of a prop than I usually do. Like I was nothing more than… a dance dummy, used as teaching material f

or demonstration purposes. When we started the month, Lord Fabulous would at least try to include the other people in the class. He would ask questions that everyone was allowed to answer, and try to get people to volunteer to demonstrate figures after he showed everyone the steps, and only resorted to calling Sparkledancer and I out to the floor if no one else spoke up. He knew that both of us already knew all the figures and techniques, because almost all of them were part of our last competition routine. This class, however, there was no offer to let others do anything or answer any of the questions, he just called us out for everything. Sparkledancer and I spent most of that class in the middle of the room, either being asked to step through the figures slowly so that everyone could see what we were up to, or sometimes even just standing there while Lord Fabulous posed us to show the nuances of the proper movements. It was kind of awkward being posed like a manikin. Then again, this isn’t the first time I have been asked to be the dance dummy, and I’m fairly certain it won’t be the last. Next Friday we will switch over to go through Paso Doble again, and half the people I expect to take the class with us haven’t done that style of dance before, let alone taken the class. All of the figures I think we’ll go through in class I believe are already in the competition routine that Lady Q taught me, so it may end up being a whole month of being the dance dummy. It’s not all bad though – it helps reinforce the things I’ve learned previously.

Saturday during a coaching session with Lord Fabulous, we went back to International styles to work on putting together routines. The first one was International Tango. This was the first time that I have ever really looked at the International Tango; I’ve always done American Tango before, and the only other style of Tango I’ve watched people do was the Argentinian Tango. The things we went over didn’t seem too bad, just different enough from the American style figures I already knew to mix me up several times. The progressive side step that I was shown will probably take a bit of doing just to cement it in place as the new “basic” step of this style. The head flick, which I was told 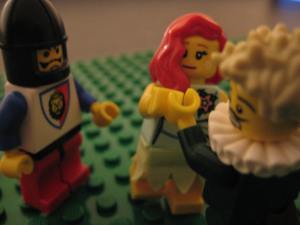 was a very International Tango thing, is a bit weird, but then I’m not much of a Tango person in general, so the stylistic pieces of the dance just weird me out in general. I think I’m just at the point where I’ve moved beyond thinking of Tango as just “that dance people do with a rose in their mouth,” but I don’t know if I will ever learn to appreciate it on the same level that Lord Fabulous seems to. By the time we moved on to the next dance style, we had put together figures to cover one long wall and one short wall. Halfway around felt pretty good for one day when doing a style I’ve never really done before.

We switched over to Samba next. It’s been a long time since I’ve done Samba in any form other than line-dance form, so I was feeling a bit rusty. Nothing we mapped out for the first long wall was terribly difficult though, so that helped. We did put in the traveling botafogos, much to my delight. That means that I have even more of a reason to start saying that word… botafogo… it’s my favorite word that I’ve learned from dancing, so the more chances I have to use it, the better. As we finished up working on the pieces of the Samba for the day, Sparkledancer and I started talking with Lord Fabulous about the plan to add in some coaching sessions every other week with Lady Q. We all agreed to make it happen, and try and schedule them so they ran back-to-back with our already scheduled Saturday time slot with him, just to make things easier for everyone. We told Lady Q about the idea as she was walking by, and she was excited about it. She had originally wanted to work with us to create a Samba routine once we finished up our Paso Doble routine with her, but since Lord Fabulous seems to have taken that upon himself, I’m not sure what we’ll be doing with her now. Maybe we’ll have her work with us on getting the crazy rhythm bounce technique correct, and I might cajole her into changing what we did with Lord Fabulous to add in more botafogos, because more of them would increase my level of joy.

Because it’s a new month, all new group classes have started. Fridays, as I said earlier, are going to swap over to Paso Doble. Wednesdays are switching from Jive to American Viennese Waltz. I always love taking Viennese Waltz classes, since it gives me an opportunity to practice this terrifying style, and learn other cool things that I can do while moving rapidly around the room. This month though, half of the people in class with us have never done Viennese Waltz before. Ever. So I don’t think we will be going over any stuff that is new to me at any point this month. Much like Jive class was last 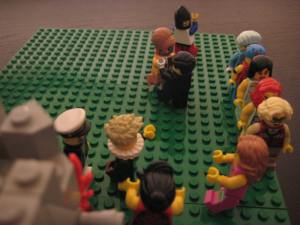 month, this month is going to end up being exhausting – it’s another high-energy dance, with three males in class and (at least this week) seven females, so I do a lot of work so that every lady can get two or three chances to practice the steps. We spent the entire class period this week just going through the reverse turn, which was a bit of a struggle. It seems like many people have this notion of personal space that they don’t like invaded, or don’t like invading with other people. A dance like Viennese Waltz works better if you can stand closer to your partner, because it makes it much easier to rotate around them if they aren’t arm’s length away from you. Some people just didn’t like standing too close to me, so we struggled to travel down the floor. I mean, I did take a shower before going to dance class that night, so I don’t think they thought I smelled bad or anything. I figure that we’re all dance friends, so there’s no reason to have personal space issues, right?

This coming Saturday night will be the showcase party. Apparently it’s going to be huge – Lord Fabulous mentioned there were close to 100 acts going on that night. Supposedly they are opening the doors with the first course of the meal already on the tables to help speed things along. It should be a good time. All the people from the Land of the Loft are going to gather around a few tables together and be loud and obnoxious whenever one of our own is on the stage, because that’s what makes dance performances fun. I’ll try and bring something to write on while I’m there, so I can make some notes to tell you all about after the party is over.