This week during the Saturday coaching lesson Sparkledancer and I have, we decided to switch things up a little. Rather than focus on stuff for the upcoming competition, we asked Lord Fabulous to go over some swing-style things with us to help get us ready for the upcoming 1920s Swing party. We spent some time discussing some of my thoughts about Jive vs. East Coast Swing vs. West Coast Swing, and Lord Fabulous gave me the impression that if I could do it in East Coast Swing then I should be able to do it in Jive as well. With that in mind, he put on an East Coast Swing song and told us to just dance and show him what we actually knew for East Coast Swing so he could see where we were. I think this was the first time that we had actually looked at swing with him since he took that initial video of our West Coast Swing routine weeks ago so that he could figure out what he could add to that. When we finished the freestyle dance, he told us that it looked like we knew a fairly large amount of swing figures, and that everything I had done would be able to work between Jive and East Coast Swing so long as I kept the correct technique for each style.

Then, so that we could be cooler than everyone else, he taught us a couple of fancier new swing moves that we could pull out during the party to try and impress. The first was something he called the Simple Turn, which must be named that because the guy’s part is so easy. Seriously, as long as I don’t miss when I “throw” the girl’s hand

from my left to my right hand, I don’t really have a lot to worry about. That is one of the nice things about being a guy – but before all you ladies go looking into gender reassignment surgery, remember that no one is actually watching the guys even when we do turn, so it’s OK for you to have the more difficult and exciting-to-watch figures. The second figure we worked on is something that he called the Promenade Run. This move, as I was told, is something that not only translates between Jive and East Coast Swing, but also Samba. We also worked on hip isolations, much like we did in the Jive group class that I have been taking this month. I don’t know why everyone seems to want me to practice hip isolations when so many people are around watching. I could go home and work on them where it’s quiet and no one is there to laugh at me because of how funny I look when trying to move my hips like that. Seriously, I know I mentioned it before, but I have white-boy hips. They will probably never look like anything else, no matter how much I practice moving them gracefully.

At the end we also went back to our Pasodoble routine once again. We seem to be ending every coaching session by going through that one at least once or twice. This week though, as we were finishing up, Lord Fabulous turned to me and randomly asked “How well can you jump?” Looking at him quizzically, I told him I could jump just fine, so he told me that he had something that he wanted Lady Q to add in at the very end of our routine if I could do it. He proceeded to demonstrate what he called the tour jete, which I believe is actually a ballet move, followed up by taking a knee with the arms spread wide. The move itself looks really impressive, but I was wearing jeans at the time so I didn’t have full range of motion while everyone was watching. Still, both Lord Fabulous and Lady Q seemed amazed that I could pull it off. With a little more practice (and a different pair of pants), it should look even better. If everything works out, Sparkledancer and I have talked about finishing up the other half of the routine with Lady Q on the last weekend of this month.

As the week progressed, it became obvious that it was no longer the holiday season. All the people that had been missing have finally returned, so the Land of the Loft 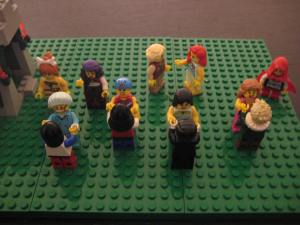 now feels much fuller as the group classes are run. It was especially obvious during the Thursday night classes I usually attend. During the Rumba class with Hot Tottie, we started out with three times as many women as there were men. Even part of the way through class when Lord Fabulous stepped in to assist, that made four of us to work with the nine ladies that had come that night. We didn’t go through much in the way of figures or technique, because just allowing all the women to rotate through the line all the way through once for each figure so they could practice turned out to be an ordeal. Some of the women devolved into anarchy, having conversations and missing the rotations down the line and screwing up the people waiting behind them. By the time class was over, I was glad to get a moment to stretch and catch my breath.

After the Rumba class, almost everyone stayed around for the new fitness class that Lady Q was teaching. This one was supposed to be the standardized syllabus that would replace the Pilates class that was being held on Saturday mornings, so everyone had their mats out and we were all packed tightly on one side of the studio. Hot Tottie had a lesson with Corte during the class and he wanted to work on some Foxtrot, so we tried to leave them as much room as possible. Even with cramming everyone together, they ended up doing the Foxtrot going up and down in a line along one of the short walls. I probably wouldn’t have stayed for the class if I didn’t get such a hard time for skipping it last week. The Lords and Ladies of the Dance Kingdom were very excited to get feedback on these new routines that they had worked on putting together for their fitness offerings. It was a little weird, since I ended up getting stuck in the middle surrounded by a bunch of women, and I felt like I was being watched the whole time. Jack was the only other male in class with me, so we really stood out. At some point, I know Lord Fabulous got up in front of the class and was taking pictures of everyone on their mats on the floor to send to the Princess.

Speaking of the Princess, there are only a couple of days until she’ll be here. She is going to be teaching the newcomer level class that goes on between the fitness class and my coaching lesson on Saturday, so I think I may just hang around and join the class rather than disappear and reappear during that time period like I usually do. I’ve never taken a class with her, so I figure it will introduce me to the way she looks at things before she sits in on my coaching lesson. That should help to calm my nerves a bit. I don’t know why having the Princess around makes me so nervous, it really shouldn’t. I guess it’s kind of like the reaction people at large companies have when the CEO shows up at one of their meetings – sure, they are just people like everyone else, but they have that unspoken authority that makes you sweat a bit when they are watching you.

Once that’s all over, then I get a short break to go home and take care of everything else I would normally do before heading back out to the Great Dance Hall by the

Lake for the party. That night is going to be exhausting. The way I see it, even if I stick with dancing with the ladies from the Land of the Loft only, I still won’t get much of a break that night. Maybe I’ll hope for cold weather that night, just this once, so that I can go outside every couple of songs and cool down quickly before the next dance. I should probably eat a million calories too, just to make sure I have enough energy to keep going all night. It’s going to be fun; I’m really looking forward to it!

One thought on “Hit Me With A Hot Note”