I rearranged my schedule this week so that I could go to the Thursday group classes instead of the normal Tuesday group class that I have been going to in order to work with Hot Tottie. I figured this would be the only real way I would get to learn from him, seeing as how his schedule is always booked otherwise. Plus, it falls on my normal recovery week in my workout schedule, so it makes it much easier to move things around on my calendar to do this.

Honestly, for me this felt like the best day to start taking the Thursday group class. Because next week there is a holiday on

Thursday, this was the last class of the month. They had been doing lower-level Foxtrot on Thursdays, so today I fell in with everyone as they reviewed everything that they had spent the rest of the month working on. I have been through this level Foxtrot class several times before over the last eighteen months, but recently they have been modifying the syllabus for each dance the Dance Kingdom teaches, so it was nice to quickly recap the entire level and see what was different in the syllabus all in one night rather than over the course of an entire month. Time just seemed to fly right by. I’ll be sticking with Thursdays for a while. After all, it is nice to change things up once and a while, just to keep life interesting.

My last Saturday coaching session with Lord Fabulous and Sparkledancer was interesting. We warmed up by going through the things we had been working on in Foxtrot again (lots of Foxtrot this week!), and then we started working on International Rumba. Now, 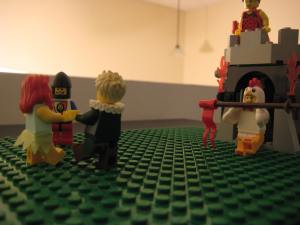 this may not seem strange to anyone reading this, but it was the offhand comment that Lord Fabulous made about what we were doing with the Rumba that has stuck with me all this time. He worked with us on the figures that we had been learning in the group class he has been teaching on Friday night, showing us all the pieces of the figure we would be learning the rest of the month. There was nothing too difficult there – the steps were similar to something that I had learned in the past for American Rumba. Somewhere along the line though, he admitted that we were learning these steps so that we could (almost an exact quote) “perfect the steps, and serve as demonstration models for the rest of the class.” So coming up, I guess we will be the guinea pigs that everyone will watch as he teaches the steps.

Sadly, I also found out that the brilliant idea that I had been debating for a unique showcase dance wasn’t actually all that unique, so Sparkledancer and I decided not to go ahead with that plan. It was really exciting to think that you’re the only one who has a great idea – the only one brave enough to pick a lesser-used dance style; and then it is incredibly disappointing to find out that someone besides you came up with the same brilliant idea and signed up for it first. After discussing our options briefly, Sparkledancer and I are now toying with the idea of looking toward the upcoming Spring Fling competition in April, as the next event that we work with Lord Fabulous toward. It’s far enough out in the future that we have plenty of time to work on any number of routines that we want to add to our repertoire, but still close enough that I think it will drive home the pressure for us to continue getting together and practicing everything, knowing that we will be performing the routines in front of people. During our next coming coaching lesson this Saturday we will try to spend a few minutes at the beginning talking with Lord Fabulous about the idea, to start working out a plan for what dance styles we want to compete in, how many heats we want to sign up for, and to get him to start thinking about building the routines for us.

At our Friday night dance this week Lord Fabulous has told us that we are going to have some kind of potluck to celebrate the holiday that is a week from now. We have done these a few times in the past, and I always brought a simple pie of some kind in the past, because I am not very skilled at culinary adventures, and also because I figure that everyone likes pie. At the end of each of our past potlucks, it always seemed like I would be bringing the entire pie home with me, save for maybe one or two small slices that I would goad people into eating. From those past experiences, I have learned a couple of lessons: 1) Never make something that I could not bring home in its entirety and finish off before it goes bad, because there’s always the chance that I could be bringing it home in its entirety. 2) Always bring finger food. This is a dance party, and people will be dancing all night. They never really stop to do complicated tasks to eat food (such as cut a slice of pie and put it on a plate). So my brilliant idea is to make (or buy) some kind of finger food. That way if someone dances by the table where the foods are laid out, they could do a quick spot turn and grab a cookie or something as they twirl by without stopping the dancing fun.

Can you picture it? Finger food is such a good idea, and I’m sure I’m not the only one to ever come to this realization, but it makes me feel like a genius now that I have this plan. I’ll let you know if it actually works or not.