Last night I stayed out late at the studio, working in an extra lesson in order to help finalize the rhythm routines. The usual Saturday lesson where Sparkledancer and I meet up and work with Sir Steven have really focused on getting us comfortable with the smooth-style dances. Those dances are really where I feel the least prepared, no matter how well I have the routine memorized. There’s something about traveling around a room with a pack of people that unnerves me, no matter how well I know the steps. Knowing how much time we have spent to perfect those routines, Sir Steven asked us both last Saturday if we would be able to hang out after the normal Wednesday class and start to put the finishing touches on the rhythm routines, so we could wrap everything up and spend the rest of the time before competition cleaning things up rather than learning things.

Impressively, we managed to get through quite a bit last night, which felt really good. Most of the work went to the Latin dances: we proved that we had Cha-Cha down, and he said that it didn’t even look half bad. Rumba and Mambo were finalized by adding in a few new figures that I am going to have to work on. East Coast Swing we got the first section of it put together in order. West Coast Swing we reviewed some of the new figures we had been working on, but didn’t put any formal order to them yet. Bolero we ran out of time to review. I’m guessing that if next week we do the same thing, we can finish everything up. So for those of you keeping score, that’s seven routines down and three to go (or eight to go, if you count the ones I have to learn to dance with Lady Q).

Memorizing these shouldn’t be that hard. I have been stepping through them in my head most of the day, and I think I should be able to do them next time I have a partner to practice with. As I’ve mentioned in the past, rhythm dances just come so much more naturally to me, so learning them isn’t what will need the most time. Making them look good will have to be the focus. There are just stupid things that I keep doing that I know are wrong, and I really need to break the bad habits I’ve grown into before getting out in front of a judge and performing. For instance, in East Coast Swing I have a tendency to rock back using only the ball of my left foot. I know that I need to plant my whole foot down when I do that, but for some reason Sir Steven catches me all the time using only the ball of my foot. My 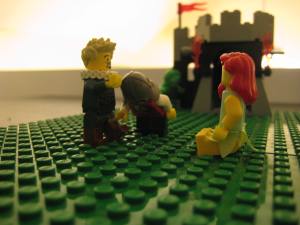 other big problem lately is that I have been working so hard to force myself to take heel steps to improve my smooth dances. I find myself at work, walking around the office taking heel steps wherever I go. Now that I’ve been doing that so much, sometimes the habit bleeds over into my rhythm dances. Last night apparently I kept doing it during Rumba, much to my chagrin. Sometimes it amazes me that there are people who do this sort of thing for a living, and manage to not make mistakes like that all the time. How does one truly learn to not take heel steps or toe steps at inappropriate times? My brain is swimming in foot movements some nights when I am lying in bed, trying to fall asleep. Lately I worry about things like that more than I do about the actual dance steps. I guess that means I am getting to the point where my technique is becoming meaningful, rather than just being focused on showing off flashier moves. Does that mean that I am growing up as a dancer?

Last Saturday the Princess also showed up during what is normally our Dance Technique class and gave a talk about the upcoming competition. I’m not sure what I was really expecting to learn from her, but most of what she talked about seemed geared toward the people who had never done a dance performance before. Some of it seemed like it was pretty much common sense, but people were still jotting down notes when she said things. Stuff like: bring a change of clothes, since you are going to get gross and sweaty and no one will want to dance with you if you are gross and sweaty. Bring something warm to wear when you are not dancing in a heat, because it will be cold in the ballroom. Make sure to warm up in the morning. Take advantage of practice time. Pay attention to what heats you are dancing in, because they won’t stop the event if you aren’t ready to go. I started to space out after a while listening to things. Looking around, it was funny to see that the Princess had pulled her chair into the back corner to leave room on the dance floor for the lessons Lord Fabulous and Lady Q were giving, and all of us had taken a seat on the floor in front of her, kind of like kindergarteners listening to the teacher read a story.

One interesting note that I found out during that talk was that my dance partner and I were the only people from our studio brave enough to sign up for one of the championship rounds. Everyone else is doing some varying number of heats, but we will be participating in the amateur-level 5-dance American Rhythm championship round. It sounded like fun to me, which is why I signed up. The thing I like about this championship is that the amateurs and the Pro-Am couples will be split up, so this time I may actually have a chance of getting something higher than last place. If Sparkledancer and I can get second-to-last place, I will consider that a huge win in my book. If they give us some

kind of trophy, I am going to go out and buy a huge shelf to put up in my living room just to display that one item, even if it is just a tiny trophy. I would be really proud of it. I don’t actually know what they hand out as prizes for championship rounds like this, seeing as how I’ve never done better than last place. Maybe they give out medals instead. If they did that, I would probably wear that medal every day for a month, just to make sure everyone I walk past sees it. I’m guessing though the prize is something like dance scholarship money or something, but I can dream.

One thing I am really going to try and do this time is to make sure I perform during these routines. The last set of scores I got told me that my weak point was not technique necessarily, but performance. So I am going to try my best to be interesting to watch this time, so that people will have fun seeing me on the floor even if I totally mess up the steps that I am supposed to be doing. That’s a hard skill to practice. Most of the time when working with Sir Steven, we are being so serious trying to learn the steps needed that even pasting on a cheesy smile seems to break concentration. I don’t just want to have a fake, cheesy smile either. I want to be genuinely interesting, something people want to watch. I want to do more than play the oft-used parts that one sees the higher level dancers around us use – like the girls who pretend to be not interested in the boy while dancing, and the boy is dancing to try and woo the girl. That seems so… archetypal. I want to be able to portray myself, to show off the fun-loving free spirit that I am in such a way that draws people in and keeps them interested in seeing what I can do, even if I am dancing something serious like a slow Waltz. That’s how I want to perform. That’s what I need to work on.

As soon as I get the steps memorized, that is. One thing at a time, right?