Friday turned out to be a strange sort of night.

I felt kind of let down at the luau party. No one that I had invited showed up. The party was a good time, but by the end of the night when no strangers that had been interested when I talked to them had arrived, I knew that my attempts at being a dance ambassador had failed. Maybe I am not really as cut out for that job as I had thought. Does this mean that I will have to go back to Dance Ambassador training camp? What am I doing wrong? Maybe there is a different way to approach people and get them interested in coming to dance with us. What if I had danced for them? No, that might have scared them away, screaming and tearing their hair out. Perhaps I need to start bringing the ladies from the studio around with me wherever I go. They are much nicer to look at, and probably less threatening when talking to other ladies about going dancing than I am.

The night went well though. Several other members of our little land brought people with them to show them what we do for fun. The normal group classes that run on Friday nights were thrown out so that we could go over the basics of a few dancers, to give all those who had never danced before an idea of something to do during the late night dance party. Another thing that the Lords and Lady set up to impress the new faces in the crowd was a couple of performances 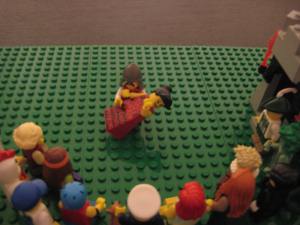 by the nobles. Sir Steven and Lady Q performed a Bolero routine together that made all of the Bolero steps that I know look really sad – when the two of them (who both obviously know what they’re doing) dance together, it makes me feel like I don’t know a whole lot. Lord Fabulous had invited one of the Ladies from the Land of the Lake to stop by and perform a Viennese Waltz routine with him. Near the end of it, they got to a point and he lifted her off the ground, twirling around while holding her. Remember last week when I said normal rotations in Viennese Waltz were terrifying? I’m sure I could find a girl I could pick up and spin like that, but finding one brave enough to let me do that while rotating that quickly is questionable. It was pretty awesome to watch.

The Princess and the King also showed up for the party. That was an unexpected twist. I had thought that it was going to be a quiet evening that wouldn’t be too out of the ordinary, aside from the random new people who showed up. Then they appeared, and there was clapping and cheering, and suddenly I had this inexplicable feeling that I had to be on my best behavior. However, unlike previous parties I have gone to in the Dance Kingdom where this pair of royalty would be mingling with the crowd and the Princess would be dancing with various students on and off throughout the night, the two of them danced together almost exclusively. It was surprising 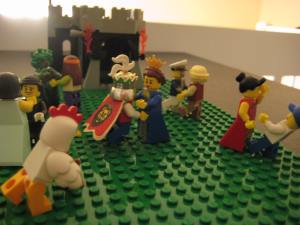 for the fact that usually the King stands off to the side, taking pictures and video or keeping the peace – doing Kingly duties, as one might expect. It turns out that he is actually quite the accomplished dancer himself, and I guess I just never really registered that fact before, until watching the two of them that night. The only time the two of them split up seemed to be when there was a line dance put on. Let me tell you, I don’t know if I have ever heard the Wobble for so long before. So… much… Wobbling… especially at the end of the night, where they put it on as the last dance. The Princess had all this energy and the song just kept going and going, and she was loving it. Looking around at all the faces on the dance floor, you could see how tired everyone was by this point of the night, but everyone just kept Wobbling, and the Princess kept cheering them all on.

Then it was over. Released from the studio, we went off to the ice cream parlor to meet up again. This week we somehow convinced some new people who had never joined us before to come along. The weird part was that when we got there, the banished student Flexy was waiting for us. She was in a rather good mood when I spoke with her briefly, telling me about how she had joined another kingdom, and was quite excited that after her first day there, she had already learned a Quickstep routine. She made mention of how her new instructor was so good at teaching things, so she picked up this new Quickstep routine so quickly… without seeming to take into account 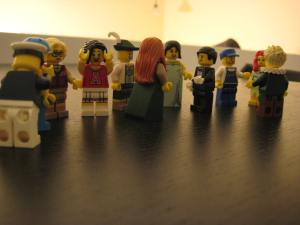 the serious leg up she was given by learning the basics of Quickstep from Sir Steven while a member of the Dance Kingdom. We tried to keep the conversations with her lighthearted and avoid talking directly about the things we were doing over at the Dance Kingdom. The new people that we had invited to join us (none of whom had been dancing for very long) didn’t know her, and we didn’t want her to say anything bad about her being banished. When she was talking with just me, and she started to go off on seemingly teenage tirades about her treatment there, I would tell her a joke and thus disarm the conversation. I’ve spent enough time around her, and I know how to use her attention deficit against her. When she was on the other side of the group talking with Enthusiasm and Bony, Enthusiasm later told me that she was doing the same thing – steering the conversation along to keep the bad blood out of our fun night.

So yeah, strange Friday. This weekend we should be back to a more normal rotation on Friday night. If I’m lucky, I may even get to bed before 1:00AM so that I won’t be so tired Saturday morning when I get up to make it back to the studio by 10:00AM for Lady Q’s Pilates class. Maybe. I’m not putting any money on that yet though.