Turns out that I was right – rotating that much in our Bolero routine was weird. Even Sir Steven thought so. We altered things so now instead of four ninety degree turns, we are doing two 180 degree turns. It took a bit to master those, but I think they will make the whole routine flow better.

The biggest thing left to get comfortable with is our Waltz routine. It’s one of those things that my partner and I do not get to practice together from start to

finish all that often. When we are at the studio, it’s hard to find a track going all around the outside of the room without running into people. Mostly we have practiced sections of it – use the same wall, go from one corner to the next, and then go back to start and use the same wall again. Mentally I can link the pieces together, but that doesn’t always work in practice. So for the rest of this week, we are using a section of street in front of my house to practice the routine all the way around the “room” – it is the biggest place I could think of where there was nothing to run into (aside from the occasional car). It’s more difficult than it sounds, practicing on the street. On the one hand, we are now doing it in sneakers, so turning and pivoting on the asphalt is really non-existent. On the other hand, the street slopes gradually – it has a rise as you move away from the middle of the road (for drainage), and it also slopes uphill toward the intersection, so it seems I am fighting to lead her uphill constantly.

I’m not sure how many heats we are signed up for in the Waltz, but we should be pretty good at it by the time Saturday morning rolls around. Maybe Waltzing non-stop on those hills will make the flat ballroom seem like a breeze once we get out on it.

One thing I didn’t think about in preparation for all this was that there was a dance party after dinner. So, instead of two outfits, I think I am going to need to bring three. Hopefully I don’t forget between now and then. I think I heard that it’s a cocktail-type party. That’s one thing that being a member of the Dance Kingdom affords you: plenty of occasions to get dressed up. A number of the women from our studio and my dance partner went out this weekend to a 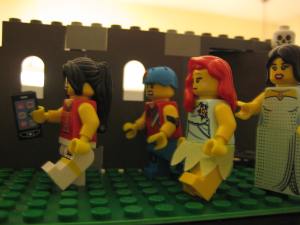 nearby mall to try and find a dress for Flexy to wear as she performs. The story I got back was that another of the women also bought another dress while there, even though she already has a whole slew of them. Her excuse was that, since she goes to so many more fancy parties now than she used to, she feels like she can’t wear the same things all the time. I know my dance partner has said similar things to me as well. This is part of the reason why dancing is an expensive hobby, I feel.

(Don’t get me wrong – there’s a good chance I may use the same excuse to talk myself into buying some more fancy dress up clothes someday. It’s not just the females who get judged based on their appearance in this realm.)

There’s a big part of me that can’t wait for Saturday to be over either. This last month has been crazy, learning all the routines, refining them, continuing to study other random things (like Quick Step) – all in the hope that when the contest comes we won’t let Sir Steven down, and maybe even gain a glimmer of recognition in the eyes of the Princess or the King. It’s kind of exhausting. The Sunday after the contest I may not even get out of bed. So… wish us luck! We’ll see just how regal this experience actually is in just five days!